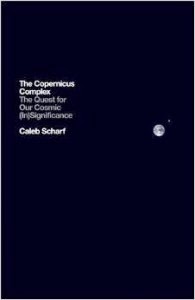 Gravity’s Engines, Caleb Scharf’s first book was one of the best cosmology titles I’ve ever read. In the way it explored lack holes and their relationship to galaxies and the universe it was quite stunning. The only downside was a certain floweriness of style (one reviewer described it as ‘rich language’, but, no, it was floweriness) and the occasional dip into amateur philosophising. The big problem with The Copernicus Complex is that this philosophising becomes the main backbone of the book, which leaves it without an effective narrative arc.
The good news first. There are chapters where Scharf really delivers the goods. There’s a brilliant description of the latest views on the formation of the solar system, for instance. An interesting description of the different types of planets discovered around other solar systems. And even an easy-to-grasp introduction to Bayesian statistics, though this could do with a little more meat.
However, the problem is that the thesis of the book is to explore ‘the quest for our cosmic (in)significance.’ Scharf interestingly talks about the way the move to the Copernican model, shifting the Earth from the centre of the universe, reduced our sense of self-importance. But the real problem here is that there is simply no data to support all the later conjecture about whether life is unusual or common on other planets, so we end up with much hand waving and little substance. There are pages at a time that come to the conclusion ‘so this doesn’t tell us anything.’ Elsewhere we discover ‘If we carefully step through the mental minefield of Bayesian inference, we come to an unsettling conclusion: we can infer relatively little about the statistics of life in the universe from the history of life on Earth.’ That doesn’t so much seem an ‘unsettling conclusion’ as the obvious and not at all surprising one.
To make matters worse, Scharf repeatedly vastly over-inflates the significance of the topic to life, the universe and everything, at least as far as non-cosmologists are concerned. He tells us, for instance, that the discovery that the planetary motions of our solar system are unpredictable in the very long term ‘is a profoundly disturbing discovery.’ [His italics.] No, it really isn’t. It’s interesting, but it’s hardly the kind of thing that’s going to make the six o’clock news.
There were minor irritations too. Even if the book is primarily aimed at a US audience, there is no excuse for just giving temperatures in Fahrenheit. And we had yet again the old chestnut rehashed that Giordano Bruno ‘paid dearly for his views’ [that the Sun was merely a star and there were endless other inhabited worlds]. These views were relatively unusual, but not unique, and certainly not the reason Bruno was burned by the Catholics, which was for common-or-garden religious heresy, not his rather poor scientific theorising.
Don’t get me wrong, there are plenty of worse cosmology books that this, and I would buy it for that description of the formation of the solar system alone. But it’s a real let down after its predecessor.