What a Wonderful World – Marcus Chown **** 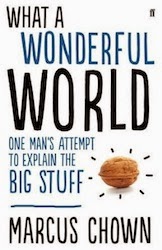 Marcus Chown has always been one of my favourite physics-based science writers, and after the rather shaky Tweeting the Universe it is good to see him back on form with What a Wonderful World. However, this isn’t just a physics book, it’s a brave attempt to take on the whole of science – or rather the bits of science, life and the universe that interest Chown. And on the whole it succeeds wonderfully. I found it was like eating chocolate digestives – when I finished one of the relatively short chapters I just wanted to start another every time.
The organization of these chapters can seem a little random, but along the way they are clumped into sections labelled ‘How we work’, ‘Putting matter to work’, ‘Earth works’, ‘Deep workings’ and ‘The cosmic connection.’ Some of these are obvious, if you accept ‘deep workings’ as primarily being the essentials of physics… except electromagnetism is in the ‘Putting matter’ work section, which is the strangest ragbag of them all, also including civilisation, computers, money and capitalism. (That last chapter is the least satisfactory of the whole book, more about Chown’s political leanings than science.)
Of course this approach means there are big gaps in what is covered – it is very much a personal journey for Chown – but it doesn’t stop it being a delight to read with many enjoyable little snippets of information and a true sense that we are exploring the underbelly of the workings of the world. I think the best parallel is something like a David Attenborough TV series – Attenborough can’t hope to cover all there is to say, for instance, about the oceans in a series, but instead he picks out areas that are particularly interesting or just those with a personal relevance for him, and that is what Chown has done here. On the whole it makes an inspiring read.
I do have to disagree with one sentiment, which reflects, perhaps, the only real consistent flaw in the book. Chown comments ‘Captain James T. Kirk of the starship Enterprise called space “the final frontier”. But he was mistaken. It is not space that is the final frontier. It is the human brain: the ultimate piece of “matter with curiosity”.’ Leaving aside the fact that Kirk is a fictional character and so couldn’t be mistaken about the script, what Chown is doing here is confusing metaphor with reality. Space is the final frontier, the final physical location we have to explore and set up home. In the metaphorical sense of ‘frontiers of science’ then, yes, the brain has a lot for us to find out (although in all fairness, an astrophysicist like Chown ought to know we are likely to succeed in understanding that long before we have physically explored all of space) – but it isn’t a true frontier.
This might seem a trivial point but it reflects a wider concern with a tendency to gloss over things, to make expansive sweeping comments without really explaining the science. Sometimes this is fine, sometimes it misses the important bits, and occasionally it makes it harder to understand the science beneath the illustrative words. So, for example, in talking about an oxygen atom which has a wave function with two strong peaks 20 metres apart, Chown tells us this corresponds ‘to an oxygen atom that is simultaneously 10 metres to your left and 10 metres to your right – in other words, in two places at once.’ Well, no, it doesn’t. It just means there equal quite high probabilities of it being in each location. The wave function is a probability wave and before a measurement is taken the atom isn’t anywhere specific – certainly not in two places at once.
However, I think to make this more than a quibble about a book that takes in so much of science is unfair. It would difficult indeed to deal with such a broad canvas without being summary in many places. And without doubt this is one of the best ‘everything you need to get you interested in science’ books I’ve come across. It may not rival Richard Dawkins’ superb explanation of evolution in The Magic of Reality – Chown misses Dawkins’ key eye-opening observation that every organism is the same species as its parents – but he knocks Dawkins into a cocked hat on physics and cosmology. It’s an ideal first popular science book for an adult, a tempting smorgasbord of all the possibilities reading popular science can offer.