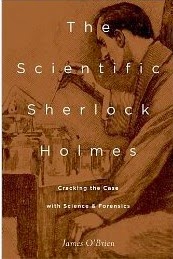 I’m a fan of Sherlock Holmes in every form from the original stories to the modern day TV version Sherlock, so it was with some enthusiasm that I came to The Scientific Sherlock Holmes. What I hoped for was something along the lines of one of the better ‘the science of’ type books – but in reality this is something quite different.
As the understated cover suggests, this feels like more of an academic book that a popular title. This comes through in a number of ways. James O’Brien is too interested in cataloguing every instance of something, rather than giving an interesting narrative. He also uses an infuriating approach, apparently common in academic writing about the Holmes stories, of using a four letter code to represent each story. So after a first reference to, say, The Hound of the Baskervilles, it is thereafter designated as HOUN. Similarly, A Study in Scarlet is STUD and so on. Unless you are a devotee, this makes the text rather impenetrable. Another academic tendency that does the author no favours is to keep referring to the way someone has theorised something about the particular topic, then giving a reference – not a great way of putting an argument across.
There is some interesting material in here as to how Doyle got his ideas, and examining in detail the different aspects of Holmes’ use of scientific and forensic methods – sometimes quite groundbreaking – and the degree of his scientific knowledge. In this, O’Brien is generally quite defensive of Holmes, giving him the benefit of the doubt when others like Isaac Asimov have suggested he was actually not up to scratch. But overall the package does not give the reader enough to get their teeth into and is presented in such a dry fashion that it is hard to consider it any more than a passing interest.
If you are deep Holmes enthusiast, the kind of person who buys and studies all the surrounding literature, this will be a must-have addition to your collection. Otherwise, probably not for you.