The Particle at the End of the Universe – Sean Carroll **** 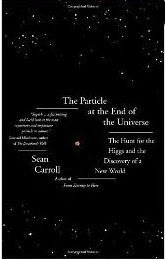 The possible discovery of the Higgs boson has prompted a flurry of books – in part because it’s significant (and because the Large Hadron Collider is a sexy bit of kit) and in part because the whole business of the Higgs field and its importance for the mass of particles is one of the most obscure and unlikely bits of physics in the current canon.
I have really mixed feelings about this entry in the genre from physicist Sean Carroll. It’s not because his book is too difficult to understand – it’s almost because it’s too easy. Generally speaking, there are three levels of good popular science. There’s TV news popular science, which cuts a lot of corners to make things totally simplistic, but manages to get the message across quickly. There’s the kind of book a good popular science writer will produce – highly approachable and readable, giving a lot more depth than the TV news and the best way to actually get an understanding of what’s going on for most of us, but still cutting some scientific corners. And there’s the kind of book a good scientist will write, which will probably go over your head the first time you read it, but if you persevere will give you the best illusion of knowing what the real science is about and getting some feel for the world of the scientist.
In his previous book From Eternity to Here, like Cox & Forshaw’s Why Does E=mc2, Carroll didn’t pull the punches. Much of the text was readable, but it may well have taken several attempts to get it to sink in. It was the perfect popular science book by an academic. Parts of this one, unfortunately verge on TV science. Some of it is so fluffy and approachable that it almost disappears into meaninglessness.
Luckily, this isn’t true of all the book. The early parts are worse. Oddly, he gets significantly better when talking about the building of the Large Hadron Collider than he does in his first attempts on the physics. And it is worth persevering as Carroll improves with his approach further in (best of all are a few appendices where he goes into more detail and we see the old, mind-bending Carroll emerging).
Some specific issues I had: it was really irritating that Carroll uses units like degrees Fahrenheit and miles rather than scientific (or European) units throughout. This is real poor TV science stuff. A lot of his science is what I’d call ‘plonking’ he states it as if it is absolute truth, not the current best theory. So, for instance, he speaks of dark matter as if it were certain fact (nary a mention of the rival MOND theory). And he says at one point ‘The world is really made out of fields. Sometimes the stuff of the universe looks like particles… but deep down it’s really fields.’
I have two problems with this. One is that one of my absolute heroes was Richard Feynman and he said of light ‘I want to emphasize that light does come in this form – particles.’ If particles are good enough for Feynman, they’re good enough for me. Secondly I think that what Carroll should be saying is ‘fields are the model that work best to describe what’s out there.’ In the end it’s a human devised model of something we can only inspect extremely indirectly. It is almost bound to be wrong – it’s just better than anything else we have at doing the job. (Yet.)
Perhaps the worst problem is the way he oversimplifies. Oddly this is a classic problem when a scientist is writing popular science (and why a good science writer is usually better) because he doesn’t know what the lay reader finds puzzling, so doesn’t bother to explain. His explanation of the application of symmetry to physics simply doesn’t fill in enough of the gaps. He says, for instance, that a mentos and diet coke experiment is symmetrical in all sorts of ways – you can point it in any direction, or translate it to any position and it works the same. Clearly this isn’t true. It wouldn’t work the same if the bottle was upside down, pointing straight at the ground, nor would it be the same if you translated it under the sea or into space. It’s a classic case of handwaving generalisation, missing out all the provisos and so making the explanation fail.
It’s certainly not a bad book – but I did prefer its rivals on a couple of counts. For a better heavy duty attempt at the physics, Frank Close’s The Infinity Puzzle wins (though that definitely is a ‘several reads to get it’ book). And for the best overall description of the search for the Higgs, combined with the most approachable but informative information on the Higgs field and the whole standard model of particle physics I’d recommend Higgs by Jim Baggott. But Sean Carroll’s book still did have a lot going for it and is still well worth considering.