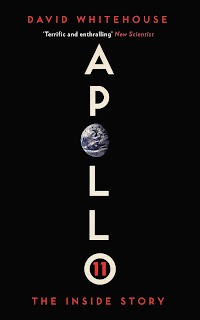 The problem with doing a book about the Apollo programme is that it's hard to find something that hasn't been said before - but with the 50th anniversary of the first moon landing just weeks away, the publication of this elegant book is extremely timely, and science-reporting veteran David Whitehouse manages to make the story feel fresh, even if you're one of the just 20 per cent of the world population who were alive on the remarkable day in 1969.

Although he has worked a lot with New Scientist, Whitehouse was for many years a TV journalist, and that comes through in his impressively engaging prose as he takes us back to the origins of the US/USSR space race that would lead to the moon landing. He passes through the wartime aspects relatively quickly, but once the two superpowers are flexing their space technology muscles, Whitehouse achieves a near perfect balance between the far less-heard USSR side of the story and the US. This is probably the best bit of the whole book.

Despite the fact we know exactly what will happen, from the low of the Apollo 1 disaster, through Apollo 11 itself to Apollo 13 and the final missions, Whitehouse keeps the drama going. I had to stop reading just before the first moon landing, and was quite irritated. There are only two slight problems with the later part of the book. Firstly, we've been introduced to a whole lot of people from both sides - whether it's the astronauts, the engineers or the mission control people, and it can become a bit of a blur as to who is who. (It's no surprise, bearing in mind hardly anyone can name the numbers  3 and 4 astronauts to land on the Moon.) And secondly, Whitehouse includes quite lengthy chunks of interview with astronauts and ground controllers. I know why he does it, especially as quite a lot of these are interviews he did himself. But, to be honest, these people can be quite dull. (Dull, on the whole, is what you want from an astronaut.)

This doesn't mean, though, that Whitehouse doesn't capture the whole period and transition from science fiction dream to reality wonderfully. An obvious comparison is Deborah Cadbury's 2005 book Space Race, which gives more details on the precursors to Apollo, but doesn't achieve the same level of engagement, or depth on Apollo. For a reader like me, who is part of the 20 per cent (I still remember building a Gemini capsule plastic kit), there's wonderful nostalgia and great insights into aspects that weren't obvious to the public (for example, how often things went wrong). For someone who wasn't around, the book gives a chance to see what we're missing out on now we aren't travelling outside our own space back yard - and perhaps a hint of what may be possible again in the future.
Paperback: