A Sonnet to Science - Sam Illingworth *** 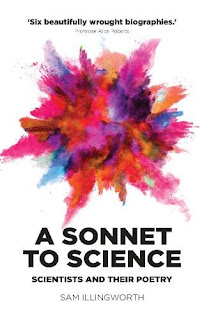 In this book, Sam Illingworth is on a mission - to 'present an aspirational account of how the two disciplines [of science and poetry] can work together.' He does this by presenting shortish biographies of six scientists (one of whom isn't) who wrote poetry, showing how the two aspects of their life were intertwined. I confess my immediate reaction to this was a Spock-style raised eyebrow: I'm not a great fan of poetry, and it seemed suspiciously like the kind of arty-sciency crossover that wouldn't help either side of the C. P. Snowian divide. However, I was genuinely prepared to be persuaded otherwise, and entered into the six biographies (Davy, Lovelace, Maxwell, Ross, Holub and Elson) with an open mind. I don't know if it's intentional, but the mix of relatively well-known and distinctly obscure names was part of the attraction.

Humphry Davy is a familiar enough individual, but his biographical details tend to come in as a side dish to the greater Michael Faraday, so it was good to see more on his background (though he doesn't come across as a very likeable character). I found his poetry stodgy (not entirely surprising given the writing style of the late eighteenth and early nineteenth century).

Next comes Ada King, Countess of Lovelace. She is a fascinating character, but to call an amateur mathematician who wrote a single document on Babbage's work a scientist stretches the term to breaking point. As Illingworth acknowledges, Lovelace's contribution is disputed. He clearly comes down on the side that makes her work 'the first computer program and Lovelace the first computer programmer', despite significant concern among some historians of science about this. There is no doubt that Lovelace's commentary on a paper by Menabrea on Babbage's Analytical Engine contains interesting work, though. Oddly, and perhaps reflecting a relatively small output in poetry as well, this section has more poetry by her father than by Lovelace herself.

Next we get onto the only truly great scientist covered here, James Clerk Maxwell. Maxwell was a towering genius of a physicist, and his life and work is well summarised in the pocket biography. Maxwell also wrote far more approachable poetry than either of the two earlier names - partly because of changing fashion, but also because his verse was often comic. This doesn't come across strongly enough in Illingworth's assessment, as he is trying to give the poetry a serious role in the scientist's life - so, for example, he doesn't mention the delightful The Song of the Atlantic Telegraph Company that Maxwell wrote for his friend Thomson (later Lord Kelvin), who at the time was having problems with the transatlantic cable, a poem that makes use of the shorthand 2(U) 'to avoid vain repetitions', representing the phrase 'Under the sea' twice in a row.

The remaining three biographies are less of notable scientists who wrote poetry than notable poets who worked in medicine and astronomy. Admittedly Ronald Ross won one of the earliest Nobel Prizes in medicine for his work on the cause and transmission of malaria, but he's hardly a household name - and comes across as an extremely unpleasant individual. In the case of Miroslav Holub it's certainly his poetry and his life through the various sufferings of his country that make the story (interestingly, in his online biography he's listed as a poet who happened to do immunology). Finally there's Rebecca Elson who studied galaxy formation and globular clusters. She died sadly just 39 - there's more a balance of work and poetry here, though as Illingworth notes, there is very limited information on her life and work.

All in all, I can't say the experience converted me to the joys of poetry, or made me think that poetry has anything useful to offer to the communication of science. If you have an interest in both science and poetry, though, this is definitely a book for you - as it will be if you're only interested in poetry and feel it has a role in making scientists more cultured.
Hardback: