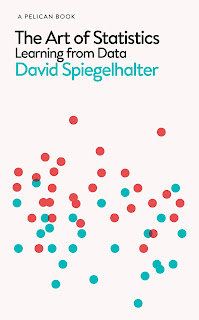 Statistics have a huge impact on us - we are bombarded with them in the news, they are essential to medical trials, fundamental science, some court cases and far more. Yet statistics is also a subject than many struggle to deal with (especially when the coupled subject of probability rears its head). Most of us just aren't equipped to understand what we're being told, or to question it when the statistics are dodgy. What David Spiegelhalter does here is provide a very thorough introductory grounding in statistics without making use of mathematical formulae*. And it's remarkable.

What will probably surprise some who have some training in statistics, particularly if (like mine) it's on the old side, is that probability doesn't come into the book until page 205. Spiegelhalter argues that as probability is the hardest aspect for us to get an intuitive feel for, this makes a lot of sense - and I think he's right. That doesn't mean that he doesn't cover all the relevant aspects, but rather that the book doesn't take a historical approach to statistics, but rather is structured on how the mathematics is used, rather than how it was developed - which is refreshing.

Along the way, Spiegelhalter poses and then explores a number of questions, from basics such as 'How many trees are there on the planet?', through 'Do statins reduce heart attacks and strokes' to 'Does extrasensory perception (ESP) exist?' (The last one is not a general Bayesian attempt on this question, incidentally, but rather a look at how psychologist Daryl Bem managed to come up with data that was statistically significant supporting the idea.) You'll find all the power of statistics, the controversies (frequentist v. Bayesian, misuse of P-values and statistical significance) and the various ways statistics can be got wrong. And this is all presented in the way a thinking reader can understand, without any previous exposure to the mathematics of statistics.

It's not perfect. There are some sections where Spiegelhalter is not clear enough in his non-technical descriptions - for example in description of how the null hypothesis is used, use of P-values and what they really mean - but his task is not helped by the complexity of what's involved, and managing all this without using mathematics is still quite remarkable. As long as the non-technical reader is prepared to go with the flow and, if necessary, re-read a few parts, the book does a brilliant job.

I really wish there was far more of this kind of thing in school maths. The vast majority of those taking maths GCSEs will never use more than arithmetic. It would be so much better if they could be exposed to this kind of explanatory teaching where they aren't required to solve equations or whatever, but instead understand how the mathematics that influences our lives works and how it can be misused. If they then go on to maths A-level, they can easily pick up the basics in the first few weeks - for the vast majority who don't, this is what maths teaching should be like (just as science teaching at this level should have far more popular science).

Spiegelhalter is warm and encouraging - it's a genuinely enjoyable read. Yes, the reader does have to work a bit, but it is entirely worth it. This book should be required reading for all politicians, journalists, medics and anyone who tries to influence people (or is influenced) by statistics. A tour de force.

* There are some in the glossary, but you don't need to see them.
Hardback: