How to Predict the Unpredictable - William Poundstone **** 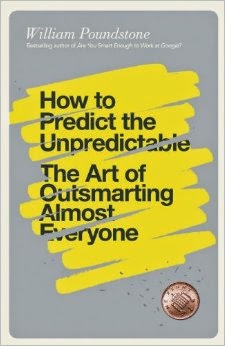 There's a certain kind of maths title that delights. It's not the kind of pure maths you'd find in an Ian Stewart book, where maths is an intricate, latticework puzzle like a net of spun sugar that need have no connection to the real world. No, this is maths as impure and dirty as it gets. It sneaks up behind us and takes us by surprise, because this is the maths at the interface with psychology - maths that often challenges our beliefs and understanding of the world. It can be both deeply satisfying and quite interesting in a QI fashion, all at the same time.

I suppose the classic of this field is Freakonomics, though I would also recommend The Tiger that Isn't and (in a modest way), my own Dice World. What William Poundstone does with great aplomb here is to unpick our dubious relationship with randomness. In the first half of the book he points out how we are particularly poor envisaging randomness, and how, as a result, if you understand how people get it wrong, it's possible to get an unexpected edge in everything from rock - paper - scissors to multiple choice questions. This all starts with a lovely description of the 'outguessing machine' an incredibly simple device that nonetheless is generally capable at beating humans at a guessing game.

The second part of the book is rather more tenuously linked by the idea of a 'hot hand' - the sport (and specifically basketball) delusion that people who are on a winning streak are more likely to succeed again - coupled with the gamblers' fallacy, which says that, for instance, after a run of black on a roulette wheel, red is more likely to come up. As Poundstone points out, these two apparently contradictory fallacies are actually linked, as the first is only applied in something involving human skill, while the second is reserved for mechanical outcomes. He shows how an understanding of these can help with football betting, property prices and the stock market.

I loved the book until well over half way through. Even in the apparently straightforward answer to 'how to outguess the lottery', Poundstone goes further than the traditional 'by using random selections, rather than human choice.' He isn't going over the boundary to say you can predict the outcome - that really is unpredictable - but rather how to maximise your winnings if you do win. Towards the end of the book, though the content got too specialist for me. There was too much on sports betting, which I have no interest in, and then on ways to beat the stock market, a section which is far too long and technically detailed for the general reader. It's a real shame that this section is used to end the book as it means the whole thing ends on quite a downer.

Don't get me wrong - the concept of beating the stock market is mind-boggling, as the market itself is the kind of chaotic system that isn't possible to forecast. But Poundstone shows how some measures, dependent on the inability of traders to overcome our ability to read patterns into randomness that isn't there, give a long term guidance on action.  And this would have been great if covered in five pages. But as the 36 page finale of the book it's a disappointment.

So this is mostly a great book - do read it and be prepared to be delighted - but unless you are a sports better or play the markets be prepared for a little disappointment towards the end.