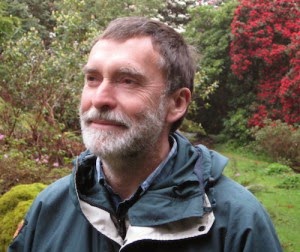 Dr Ken Thompson was for many years a lecturer in the Department of Animal and Plant Sciences at the University of Sheffield. He now writes and lectures on gardening and ecology. His latest book, Where Do Camels Belong? looks at the puzzling realities of ‘alien’ and ‘natural’ species.
Why science?
I’ve always loved discovering how the world works. There’s no thrill like finding out something new – and thinking that, just for a short while, no-one knows what you know. And without getting too philosophical about it, doing science gives life a purpose, and guarantees your own tiny bit of immortality.
Why this book?
For a long time, I was signed up to the orthodox view of alien species, i.e. ‘the only good alien is a dead alien’, so it’s probably best to ‘shoot first and ask questions later’. But then I found that the more I read, the less convincing the basic science seemed. In short, much of it read like post-hoc justification by people who had already decided what they thought, and just wanted the evidence to back them up. The book is my attempt to persuade you that you should ask the questions before you shoot.
What’s next?
I started out writing gardening books; trying to give people the actual evidence on everything from wildlife gardening to making compost. Recently, I’ve written a couple of popular science books, but maybe I’m due for another gardening book. One day I’d like to combine the two by persuading people that plants are not just vital, but also interesting, and – who knows – maybe even cool.
What’s exciting you at the moment?
I’m excited by the Conservation Evidence Project, which tries to collect together the scientific evidence that conservationists need. Whatever you’re trying to conserve, from bees to frogs, the Project will tell you what works, what doesn’t, and what hasn’t even been tried. I’m also excited – but not in a good way – by the way science is misused, or simply ignored. Politicians think they can cherry-pick the science that supports their prejudices, or worse still, ignore it altogether if it interferes with more important things, like getting re-elected. For a textbook example of how not to run an evidence-based policy, look no further than the recent badger cull. We have an Office for Budget Responsibility to stop the government telling too many lies about the economy; maybe we need an Office for Scientific Responsibility too?