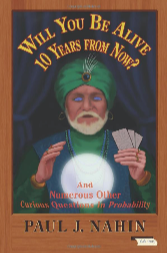 There are few mathematical subjects that are better at tantalising and intriguing than problems involving probability. In part because our natural grasp of probability is so weak, the outcomes of probability questions have an unrivalled ability to take us by surprise, to the extent that some simply deny that the outcome can possibly be right. I remember when the Monty Hall problem was first publicised a number of us were so unhappy with the right answer that we wrote computer simulations to see if the counter-intuitive solution was correct. (It was.)
This is doubly apt when looking at Paul Nahin’s book as it features regular examples of computer code to check out results, and it covers a number of other problems that were publicised by Marilyn vos Savant in Parademagazine, the same source that made Monty Hall famous in the first place. Here though, sadly, Ms vos Savant is on the losing side, as Nahin points out a number of errors in her columns that have covered probability problems.
For the general reader, this book is a real mixed bag. There are some absolute gems – problems that you can really get your teeth into and have fun with (and then often find you took entirely the wrong path), but there are also rather too many that could only excite a mathematician. Questions like ‘Given a unit square, and two points picked at random on the square, what’s the average distance between the points?’, I’m afraid does not get me even faintly interested. It’s also the case that the computer programs, in a language called MATLAB that I suspect is only available to mathematicians, are unlikely to be valuable to most readers (they would have been more accessible if he’d used Excel’s programming language, I suspect, but even then, most readers would simply ignore them).
So I think this a book that the general reader has to be prepared to skip through parts of. But it’s well worth that effort, because the bits that are of wider interest are genuinely captivating and surprising. If you aren’t scared off by formulae and probability intrigues you, give it a go – you won’t be disappointed.