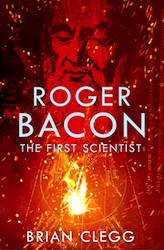 Roger Bacon takes us back to thirteenth-century Europe, to the early years of the great universities, where learning was spiced with the danger of mob violence and a terrifyingly repressive religious censorship. Roger Bacon, a humble and devout English friar (not to be confused with the Elizabethan/Jacobean politician and philosopher Francis Bacon), seems an unlikely figure to challenge the orthodoxy of his day – yet this unworldly man risked his life to establish the basis for true scientific knowledge.
Born around 1220, Bacon was passionately interested in the natural world and how things worked. Banned from writing on such dangerous topics by his Order, it was only when a new Pope proved sympathetic that he began compiling his encyclopaedia of knowledge, on everything from optics to alchemy – the synopsis took him a year and ran to 800,000 words, but he was never to complete the work itself. Sadly, the enlightened Pope died before he could read Bacon’s remarkable work, and Bacon was tried as a magician and incarcerated for ten years.
Legend transformed Bacon into a sorcerer, ‘Doctor Mirabilis’, yet he taught that all magic was fraudulent, based on human ability to deceive, and we can recognise today that his books were the first flowering of the scientific knowledge that would transform our world. He advanced the understanding of optics, he demanded a new calendar that prefigured the Gregorian reform, made geographical breakthroughs later used by Columbus, predicted everything from horseless carriages to the telescope, and stressed the importance of mathematics to science, a significance that would not be recognized for 400 years. Yet his biggest contribution was to link science and experiment, to insist that a study of the natural world by observation and exact measurement was the surest foundation for truth.
Up to now all the books about Bacon have been academic texts that were frankly less than exciting and readable. This is much more a work of popular science, though it is almost inevitable that a work on Bacon will have something of an academic feel, hence the low score in stars. Even so it gives a fascinating picture of life in a medieval university, and uncovers a man whose ideas on science have been hidden to most by years of myth and ignorance.