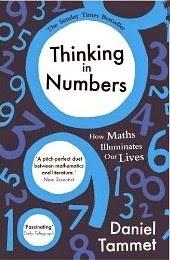 This collection of 25 essays by Daniel Tammet, probably best known for his feat of memorising vast quantities of digits of pi, is an enjoyable light way of getting an introduction to some of the reasons that maths is more than just a mechanism for doing science or adding up your shopping bills.
Some essay collections don’t work so well in book form, but these make excellent bite-sized nuggets, with Tammet ranging far and wide over a landscape that successfully pulls in poets, authors and playwrights as much as it does mathematicians. I loved, for instance, the parallels Tammet brings out between Tolstoy’s view of history and calculus.
Inevitably in such a collection there will be some pieces that appeal less to an individual reader. I was less interested in the more autobiographical essays, but I am sure they would appeal to others. If I’m being picky I’d also say Tammet is occasionally a little loose factually. So, for instance, he says the odds of him being in a particular location is 1 in 2 – he’s either there or he’s not. That’s a very strange way of defining odds, which usually means the probability of something: and clearly there isn’t a 1 in 2 chance of him being (say) in my kitchen.
Overall, though, a very enjoyable and informative read.