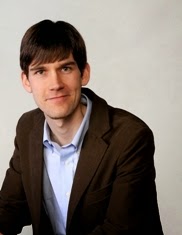 Sam Kean spent years collecting mercury from broken thermometers as a child and now he is a writer in Washington D.C. He studied physics and English and his work has appeared in the New York Times magazine, Slate and New Scientist. His first book is The Disappearing Spoon.
Why Science?
I love literature and have grown more and more interested in politics since moving to Washington, D.C. But in those fields you’re dealing with the same themes and problems as people hundreds and even thousands of years ago. Science excites me because it’s one of the few things that’s truly new and that has truly changed across the millennia. We’re no smarter than the ancient Greeks or Egyptians or Chinese in the arts but we know immeasurably more science, and it’s fun being a part of that, however modestly, through writing.
Why this book?
I’d always gravitated in school toward teachers who neglected the lesson plans in favor of telling us stories, and I finally wanted to collect all the fabulous tales about elements into one place. Plus, we talked about so few of the 118 elements in school and I just knew there had to funny, unusual, and spooky stories about elements most people have never ever heard of, too.
What’s next?
I’m working on a new book about genetics – fun, peculiar, and strange stories from the long history of human evolution. Most of them would have been lost forever if they weren’t etched (or rather encoded, waiting to be read) into our DNA.
What’s exciting you at the moment?
Astrobiology – hunting for life on other planets. It’s such a great blend of so many different fields (physics, geology, astronomy, biology, atmospheric chemistry, virology, etc., etc.) And if we do find life somewhere else in the universe I think that will be the most important discovery we could ever make.
Photo (c) Voss Studios, Austinville, Iowa, US – reproduced with permission