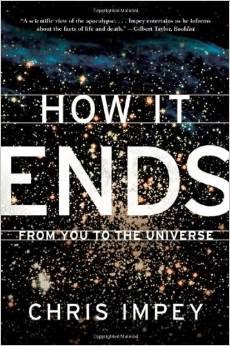 There’s a feeling in the publishing business that books on subjects that are a bit of a downer (with the exception of misery memoirs) rarely do well. The subject of this title is about as miserable as they come – how everything from people to the universe ends. Your death. The Earth’s extinction. The end of the universe. Cheerful? Not exactly.
To be fair to Chris Impey, he weaves in a lot of interesting stuff along the way. Despite the title, a lot of it isn’t about endings. Yes, he covers death, but also the nature of life and the Earth’s biosphere. You’ll learn about evolution, what stars are and how they come into being, the big bang and more along the way to the eventual demise of each and every subject. He covers the science with a light touch, but manages to pack in a good amount of information. It’s never difficult to absorb, which with such a big canvas is impressive. And yet it’s hard not to be depressed, especially when he starts off with personal death. It might be inevitable, but this is one subject I’m prepared to have my head in the sand about.
Apart from the subject, the other problem I have with the book is its style. It will appeal to some readers, so I can’t say this is a universal issue, but it doesn’t always work for me. There is an irritating attempt at trendiness that comes through sometimes. It’s interesting that the author is pictured on the back flap in a Hawaiian shirt. This is just the sort of stuff that would appear in the script of a TV show, presented by someone in a Hawaiian shirt to show he’s a ‘man of the people’ not a distant intellectual.
A good example of this is the way the author attributes the saying ‘Predictions can be very difficult – especially about the future,’ to ‘cartoonist Storm P.’ This sounds like someone very trendy, a sort of gangsta rapper of cartoonists. Unfortunately the image (and the attribution) is wrong. Many of us would think it was physicist Neils Bohr who first said this (I certainly did until I looked into it). A few might think it was baseball player Yogi Berra, though that has long been discredited. In fact Bohr did claim the quote was from the artist and writer Robert Storm Petersen (doesn’t sound quite so trendy when put like that, does he?) – but Bohr was wrong. The best information suggests it was first used in the Danish Parliament some time between 1935 and 1939. Even less trendy.
Here’s another example of this over-looseness: ‘[Fred Adams] has a counterculture vibe, like a surfer or a savvy drug user, and he doesn’t seem to take the serious business of the universe too seriously.’ Whoa, dude! Like, no way. Not my kind of popular science.
This isn’t a bad book. There’s lots of good information in it, and when Impey doesn’t get too carried away with being a man of the people it reads well. But the subject is one that doesn’t immediately make you want to read it, and I didn’t come across anything inside that made this feeling entirely go away.