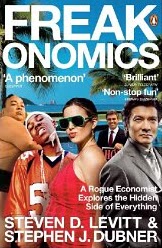 It has to be said that this book is little short of brilliant. Levitt, with the assistance of writer Dubner, turns a series of interesting statistics into a real page turner. (Which is why it’s here, despite being sometimes classified as a kind of business book.)
The way they do it is partly by taking statistics we’re really interested in – crime, education, all the things that push the button – and partially by be rigorous about the statistics, rather than the typical sloppy interpretative stuff we see every day on the TV news or coming from “experts” who might know their field but no nothing about statistics.
A great (and inevitably controversial) example is the big reduction in crime in the US from around 1990. Levitt shows how the usual suspects from increased police numbers to gun control may have had effects, but could not be responsible for this fall. Instead, he suggests and very convincingly demonstrates, it is due to the reduction in birth rate amongst poor and disadvantaged families a generation earlier due to a change in the law. It was the reduction in the likely potential criminal pool that had the biggest impact. It’s fascinating (and not all on such heavy subjects either). Everything from teachers cheating their children’s test results to real estate agents’ tricks come under the Levitt scrutiny.
Just a couple of small negative points. One is the use of the words “economics” and “economist” throughout the book. Levitt is an economist, but very little of what’s in the book is economics. It’s mostly statistics with a healthy chunk of operational research (that’s operations research in the US) thrown in. Just because economists use statistics (and probably get paid more than statisticians) doesn’t magically turn statistics into economics. It’s just plain wrong.
The other small problem is over an example of Levitt doing what he accuses “experts” of doing – stating something with confidence, but without the evidence to back it up. He tells us we’re fooling ourselves in being more afraid of flying than driving, because the “per hour” death rate of driving versus flying is equal. I’ve two problems with this. One is I think people are more interested in the per trip death rate than the per hour rate (i.e. “will I survive this journey?”) As car journeys are usually shorter in duration than plane journeys, his like-for-like comparison falls down. I did this calculation for my own book, The Complete Flyer’s Handbook and (based on UK rather US data) you were ten times more likely to be in a fatal air crash on any particular journey than you were of being in a fatal road crash (though it was a one in a million chance on the air crash, so not very likely).
Oh and I found the pages quoting newspapers on how wonderful Levitt it is that interleave each chapter rather irritating.
But none of these little negative should put you off from what is justifiably already a classic and a worthy bestseller. It’s entertaining, it’s informing, it makes you think and it will inspire you to consider what properly used statistics can do for your enterprise. Great stuff.