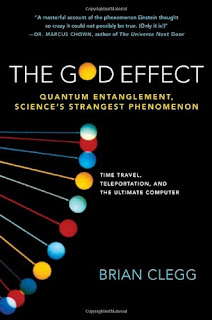 We are used to hearing about “Einstein’s greatest mistake” being his throwing in the cosmological constant to explain the expansion of the universe. These days this seems less of a mistake than it was first thought. But there’s one thing he definitely didn’t get right – that’s quantum entanglement, a concept so bizarre, that Einstein used it as an example of why quantum theory had to be wrong.
In fact it was Einstein who for once was mistaken, and entanglement has proved, as Brian Clegg’s subtitle suggests, to be one of science’s strangest phenomena. Imagine a link between two particles that is so low level that you can separate them to either side of the universe and a change in one particle will be instantly reflected in the other. Forget special relativity – the spooky connection of entanglement doesn’t know about the light speed barrier.
The God Effect (the title is a reference to the Higgs boson, also known as the God Particle, which it has been suggested requires entanglement to function) begins with an excellent background to where entanglement came from – Einstein’s original “entanglement busting” paper EPR, early attempts to show whether or not entanglement existed and the definitive experiments that demonstrated it in action. Although we’re dealing here with quantum physics at its most mindboggling, Clegg makes a great job of explaining what was going on in layman’s terms, and bringing alive the major characters not widely known outside this field, such as John Bell and Alain Aspect.
Where the book really triumphs, though, is when he moves onto the remarkable applications of entanglement that have started to be developed over the last few years. Unbreakable encryption, computers that can crack problems that would take conventional computers longer than the lifetime of the universe to cope with, even Star Trek-style matter transmitters. It’s great stuff. I particularly liked the chapter on why entanglement doesn’t allow us to send faster than light messages. Most of the books I’ve read on the subject just dismiss this as obvious, but it isn’t – in fact it’s what most people think of as soon as they hear about entanglement: surely it could be used to send faster than light messages. Clegg explains just what the implications would be – why faster than light messages would allow us to send information back in time – then shows how entanglement entices, but can never actually deliver on this promise.
There’s also some fun speculation from top scientists on what else entanglement could do – not just providing a mechanism for the Higgs boson, but also the existence of life, telepathy and more. The only criticism I have is that the chapter on quantum computers told me rather more than I wanted to know about different ways to make quantum computers work – it was still interesting, but I didn’t need that much detail.
Overall this is a superb exploration of this weird and wonderful physical phenomenon and the ways it could change our lives. It’s well written and approachable without any technical background, though I think it may also appeal to undergraduates, as entanglement tends to get very limited coverage on physics courses. Recommended.