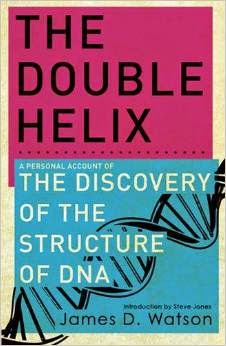 This is the daddy of them all. There have been attempts at popularising science for many a year, but James Watson’s very personal account of the discovery of the structure of DNA started the trend for popular science bestsellers, books on science that would be read by “ordinary people” not just science enthusiasts.
In some quarters it is popular to denigrate Watson’s book – but this entirely misses the point. Yes it has sexist elements, yes it supports a particular version of history that puts a Watson and Crick’s efforts in a good light – but that’s hardly surprising given that it was written in the 1950s by one of the protagonists.
But if you can see past the inevitable fact that the book doesn’t have a 21st century outlook, it’s wonderful. Firstly, it really doesn’t show its age, thanks to Watson’s excellent, personal narrative style, featuring none of the stiffness of most of the writing of the period. Secondly, Watson may give us a biased picture, but it gives a feel for the reality of scientific endeavour, as opposed to the glossy Hollywood view. Thirdly, Watson is honest about his relative ignorance of much of science, and a certain laziness in not wanting to put too much effort into reading things up that will reassure and delight anyone who enjoys science but finds some of the detailed work boring. Scientists in Watson’s world – including himself – aren’t geniuses who immediately understand what other scientists are saying. Instead they have very limited understanding outside their own little sphere of knowledge. Finally, Watson doesn’t stint from giving us some detail that a modern popularizer would shy away from. The information on molecular structures might be too much for some readers, but it’s easy enough to skip over without losing the flow.
Perhaps the biggest potential criticism of the book is over Watson’s treatment of the crystalographer Rosalind Franklin, whose case for being more prominent in the discovery of DNA has been well argued and is generally taken for granted today. (Franklin didn’t share in the Nobel Prize, which some complain about, but to be fair it was awarded after her death, and the Nobel Prize is never awarded posthumously.) It’s certainly true that Watson is, for most of the book, patronising towards Franklin, and he plays down the rather dubious way the Cambridge team obtained her X-ray photographs that would inspire them to come up with the familiar double helix structure. Nonetheless, it would be revisionist not to accept that Franklin was a prickly character and difficult to work with – very probably because of the way women were treated at the time – and Watson’s response to her was unfortunate but honest. He does at the end of the book, written a few years later after Franklin’s death, reassess her contribution and paints a more positive picture of her work.
Overall, though this is a gem of a popular science book that has stayed in print for many years for a reason. It’s a great read, plain and simple.