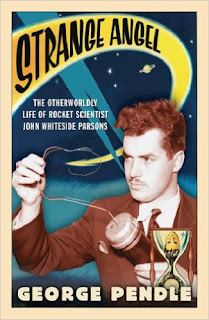 This is a case of truth being stranger than fiction in all it’s glory – you really couldn’t make this one up. John Whiteside Parsons (his real first name was Marvel, but you can understand why he was called John or Jack from an early age) was that most euphemistic of people, a genuine rocket scientist. Yet it’s hard to imagine anyone further from the typical idea of the role – and George Pendle does a superb job of painting a picture of the very strange and confused life of this man.
In one sense it’s a typical American story of the triumph of individual ability over lack of formal academic training. Despite dropping out of his college degree very early on, Parsons went on to become a recognized expert in explosives, to inspire a team at Caltech to built experimental rockets, and to devise single handed the first usable solid fuel for rockets. Along the way, you’ll discover why the US experimental rocket facility is confusingly called the Jet Propulsion Laboratory. But that’s only the start.
For instance, Parsons didn’t exactly have the poor start in life you might expect from the story above. And much more importantly, there were two strands in his life that make the story particularly fascinating, each intertwined with his rocket science. First there was science fiction. Now it’s a bit more respectable, but back then it was considered pulp garbage – yet Parsons had a strong involvement in the SF community, and many of the well known names of the period appear in his story. Secondly, he was an avid member of Aleister Crowley’s bizarre cult, the OTO. This made for a very interesting social life, not to mention some complicated family relations. Apart from anything else, this heady mix of science, sci-fi and pseudo-religion seems to have been directly responsible for launching the notorious L. Ron Hubbard into creating his own “science” based religion, Scientology.
The whole mix is fascinating. Parsons’ struggles to achieve a working rocket would make a good story in their own right, but add in the science fiction, add in the strange religion and characters like Hubbard – and finally, throw into the mix Parsons’ horrendous death in an apparently accidental explosion at home… it’s powerful stuff.
The only slight moan, and it is very slight – Pendle uses the common trick of opening with the most dramatic part of the story, in this case Parsons’ death. Because of that, the book ends rather abruptly because it leads up to the dramatic moment, but doesn’t actually mention it because that has already been done. But hey, who could resist that opening.
It’s a cracker, that rarest of things a popular science book that’s a page-turner too. What more can we say?