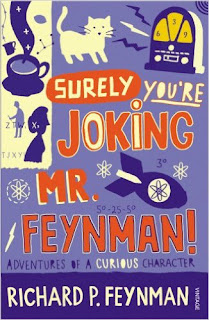 As far as the general public is concerned there is no doubt who was the greatest physicist of the 20th century – Albert Einstein. Ask a physicist, though, and Einstein will only justscrape in there ahead of Richard Feynman.
Feynman was both a superb scientist and a great storyteller. This lovely book, subtitled ‘adventures of a curious character’ is edited down from taped conversations with fellow scientist and friend, Ralph Leighton.
It’s a sort of informal autobiography, in that it runs through Feynman’s life, but it consists of series of anecdotes, often very funny, of things that happened to this remarkable man.
And they certainly did happen. During the Second World War, for instance, Feynman was working on the project to develop the atomic bomb. Feynman made significant contributions, but his stories are mostly about safe-breaking and lock picking. He was very suspicious of the security regime, which said that everything should be locked away, but then provided inadequate secure filing cabinets, so in his spare time, Feynman set about breaking into as many cabinets as he could.
This, and many other reminiscences make this a superb read whether or not you have an interest in science.

Using these links earns us commission at no cost to you
Community review – Stephen Goldberg **
Richard Feynman, a physicist, won a Nobel Prize for the development of quantum electrodynamics. This book is not a biography of Feynman, but is an anthology of scattered events in Feynman’s unusual life bringing truth to the book’s subtitle “Adventures of a curious character.” The vignettes of Feynman’s life addressed in the book covered in his childhood when he fixed radios, his life as a graduate student at Princeton University, his work on the Manhattan Project, and his career as a professor. There are also some stories that defy categorization but give a certain texture to Feynman’s life. The stories were very well written and generally quite amusing.
There are two basic types of stories, the ones about himself and some of his antics and the ones about the organizations he worked with or at. The personal stories show that he was something of a trouble-maker. While he frequently outsmarted his peers, he sometimes received his comeuppance from even smarter people such as Robert Oppenheimer. The more interesting vignettes were those that discussed some of the organizations he worked with and the most interesting of these were his conflicts with military at Los Alamos and his description of science study in Brazil.
Feynman portrays himself as an eccentric but he doesn’t necessarily portray himself in a favourable light, but I do not know if this is intentional or not. In this respect, I think that the book is an honest examination of his life. Not only was he a remarkable physicist, he was also an amateur painter and musician. He was also a womanizer and in certain respects he seemed to be bragging about this. On the other hand, he may have just been a product of his environment, having been born in 1918.
This book was disappointing because there must have been many more interesting stories revolving around his work and Nobel prize; stories that would be far more interesting than his ability as a safecracker or his desire to womanize. Thus I do not recommend this book as a source of information on the history of science. On the other hand, if you are interested in learning more about Feynman’s personality and learning that even Nobel-prize winning scientists are also human then this book can be a worthwhile read