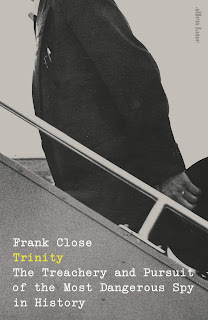 Physicist Frank Close has a kind of dual writing life - which is ideal given he's here writing about the dual life of a German nuclear physicist who was also a Russian spy. Many of Close's books give plenty of detail on a specific aspect of physics - my favourite is his compact title Neutrino, a great introduction to this fascinating particle. However, Close also has a penchant for spy history. He's already given us the story of Bruno Pontecorvo in Half Life, and now we get a biography of the Klaus Fuchs.

A communist from his youth, Fuchs fled Nazi Germany for the UK, where the outbreak of war saw him first treated as a suspicious enemy alien, but his expertise in the suddenly desperately important field of nuclear physics saw him brought into the fold, working on theory for nuclear reactors and atomic bombs, both in the UK and in the US, where he made important contributions to the Manhattan Project. Shockingly, when it all came out in 1950, it was also discovered that most of the time between 1941 and 1949, he was passing nuclear secrets to Russia - and without doubt made it possible for Russia to catch up with the West in its development of nuclear weapons.

This isn't a heavy science book - Close only gives high level details of the physics involved - but instead it features a very detailed history of Fuchs' spying activity and the (frankly bumbling) process by which he was eventually caught. Rather than paint Fuchs in black and white as an evil betrayer of his adopted country, Close gives us a balanced picture that helps understand why Fuchs felt it was important to balance up what could have been total American nuclear world dominance after the Second World War and why his conscience seemed to force him to confess, when he had proved excellent at covering his tracks and dissembling in the past.

I have slightly mixed feelings about the level of detail Close goes into. We certainly get to experience the reality of spying in all its sometimes clever, sometimes pathetic detail - not to mention the goings on at the Harwell nuclear research establishment in the UK, which seemed to have enough bed-swapping to make it an ideal topic for a modern drama series. It is also really interesting to see how MI5 developed from practically nothing to a professional(ish) intelligence agency. However, it did almost feel that Close was too, erm, close to his subject, giving us so much detailed description of conversations, journeys and so forth that at times it could become a touch tedious if not being considered as an academic title.

Another small moan - perhaps because the focus isn't the science, there were a number of scientific typos. For example, chemical formulae are written incorrectly with the number of atoms shown as a straight number rather than a subscript, we're told 100 degrees Fahrenheit is the same temperature as 100 degrees Celsius, and uranium hexafluoride is described as a 'mixture of uranium and fluorine' rather than a compound. All trivial editing errors, but suggesting that the focus was elsewhere.

There is no doubt that Close - who personally knew some of those involved - is ideally placed to tell this story, and does so with immense care. This was a crucial period in the development of the modern world, and whether or not Fuchs deserves the cover epithet of being 'the most dangerous spy in history', it's a story that is still important today.
Hardback: