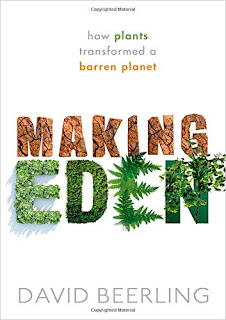 I'll be honest up front - I found parts of Making Eden hard work to read. But the effort was more than rewarded. David Beerling makes a good case that botany is unfairly seen as the Cinderella of biology - it simply doesn't get the same attention as the animal side. I realised how true this was when I saw a diagram of a 'timeline of evolution of life on Earth' the other day. Out of about 30 entries, arguably three of them applied to plants. And yet, as Beerling makes clear, without plant life, the land would still be barren and the seas far less varied. No plants - no animals.

As someone with a very limited background in biology, I learned a lot here. The sophistication of some plant mechanisms are remarkable. Beerling dedicates a chapter, for example, to what he describes as 'gas valves', the stomata that open and close on the underside of leaves, allowing carbon dioxide in. The apparent downside is that they let moisture out - but as Beerling describes this is what allows, for example, trees to lift water up through their trunks in what are kind of upside-down fountains. It makes remarkable reading.

Similarly, I was fascinated by the discussion of a special kind of evolutionary jump that could have been responsible for major changes in evolutionary development, rather than natural selection as a result of the impact of individual mutations. In these jumps, whole genomes were duplicated, allowing one set of genes to carry on their jobs, while the copies could change, taking on different roles, before the two genomes merged back together. (There is apparently still some uncertainty about this, but Beerling tells us that 'evidence is mounting'.) And there was plenty more on where plants came from in the first place, deducing the role of ancient genes, the interaction between plants and symbiotic fungi, the contributions plants have made over history to climate change and the environmental crisis we currently face. I loved the suggestion that one contribution to mitigating growing carbon dioxide levels could be to give crops access to crushed basalt, which would encourage the plants to capture and store more of the carbon than usual.

Some of these chapters (such as the climate change and environmental ones) were straight forward, readable popular science. I found with some of the others I had to do a little light skipping when Beerling got too technical or delved into unnecessary detail. In the genetic-based chapters, this came across in the abundance of technical terms. I was reminded of Richard Feynman's infamous remark in Surely You Are Joking, Mr Feynman when naming cat muscles during a talk and the other students told him they knew all that. 'Oh, you do? Then no wonder I can catch up with you so fast after you've had four years of biology. They had wasted all their time memorising stuff like that, when it could be looked up in fifteen minutes.'

Picking a page at random in the Genomes Decoded chapter, I find at least 10 technical terms, some of which are mentioned here, but then never used again. It just makes the brain rattle a little. In other parts, Beerling describes in elegant detail how a particular distinction about a fossilised plant could be deduced - but there is so much detail I found my eyes drifting onwards to move things on a little.

Don't get me wrong - I am really glad I read this book. I have learned a lot and many parts were simply fascinating. I just wouldn't want to give the impression it's an easy read, where instead it takes some work, but rewards the reader richly.
Hardback: