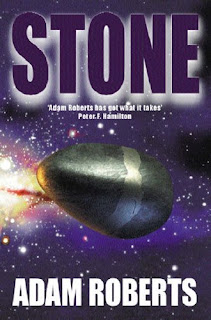 I'm beginning to think that Adam Roberts holds the same  position in science fiction writing as Gene Wolfe does as the ultimate fantasy writer. Although some of Wolfe's books are delights to read, others are hard work - but often rewarding. Some seem not to quite hit the mark, but this is inevitable because he pushes the boundaries so effectively. Every time I read a new (to me) Adam Roberts title, there's something new and interesting, even in the ones that don't quite make it.

This is one of Roberts' early titles, which I hadn't come across until a friend reviewed it. I'll say straight away that it is somewhat limited by its format, made up as it is of a series of letters addressed by the main character to the titular stone. (Yes, a pebble.) However, that's part of the way that Roberts regularly plays around with the way fiction works. And it doesn't get in the way of some fascinating content.

In part, Roberts is examining the impact of an apparently Utopian future society. This is done in style, down to having lovely little footnotes explaining limitations in the translation from their language Glicé (a long-term descendent of American English). But we're also taken on a trip through the mind of a psychopath, prepared to wipe out the inhabitants of a whole planet to achieve his aims. And to make it more fun, he starts off in a prison that is inconveniently located beneath the surface of a star.

And that's not all. The society is maintained by collections of nanotech devices in human bodies which modify them at will and keep them alive in most circumstances - making them distinctly difficult to kill. Such nanotechnology has featured in other SF before, but rarely in such an original way.

At times the storyline can drag a little, especially because of the indirect mode of presenting the narrative, but it all seems worth it when reaching the denouement, which is excellent. This is where Roberts can get ahead of Wolfe, who often is so brilliant and mysterious through the majority of the text that his endings can disappoint.

Overall, not the best reading experience amongst Roberts' titles, but without doubt including some of his wonderfully original thinking.

Sadly out of print except the Kindle edition, though secondhand copies are available.