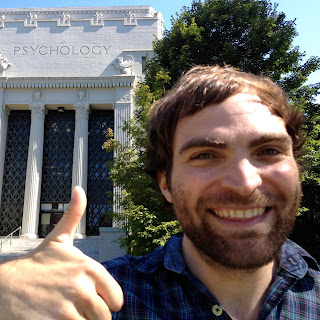 Ben Ambridge is Reader in Psychology at the University of Liverpool and the ESRC International Centre for Language and Communicative Development (LuCiD). He is a recipient of the Guardian-Wellcome Science Writing Prize and his first book Psy-Q: A Mind-Bending Miscellany of Everyday Psychology was a Sunday Times Book of the Year and has been translated into a dozen languages. He lives in Sale, Greater Manchester. His latest title is Are You Smarter than a Chimpanzee?

If you want to figure out how something works, you’ve got two options. You can collect the best possible evidence, look at it even handedly, and do your best to come up with a theory that explains this evidence and predicts what will happen in similar scenarios in the future. Or you can just make shit up.

We humans like to think that we’re not only much more intelligent than other animals - which we clearly are - but a whole different type of creature altogether; that we’re unique in having logical thought, reasoning, consciousness, even an immortal soul. So what I wanted to do is debunk that myth: All our patterns of thinking and behaving have their roots in our evolutionary origins. Or, as I put it in the book, when it comes to our abilities and those of other animals, everything is relative, and everything is a relative.

I don’t have any definite plans, but I’d like to come back to my own area of research - children’s language development - and write a popular book on that.

What’s exciting you at the moment?

I haven’t tried it myself yet, but I’m excited to see what the emerging virtual reality technology is going to bring us. Will it change the world like the iPhone, or will it just be a gimmicky flash-in-the-pan like 3D TV?