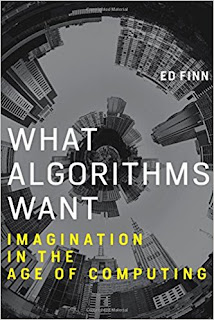 The science fiction author Neal Stephenson comments on the cover of this book that it is 'highly enjoyable'. I suspect this is because in the opening of the book, Ed Finn repeatedly refers to Stephenson's impressive novel Snow Crash. If Stephenson actually found reading What Algorithms Want to be fun, he needs to get out more. I would, instead, describe it is extremely hard work to read - but it is hard work that is rewarded with some impressive insights. What Algorithms Want is both clever and able to cut away the glamour (in the old sense of the word) of the internet and the cyber world to reveal what's really going on beneath - as long as you can cope with the way that the book is written.


A Finn points out, most of us rely on algorithms, from Google’s search to Facebook’s timeline, not consciously considering that these aren’t just tools to help us, but processes that have their own (or their makers) intentions embodied in them. What’s more, there's really important material here about the insidious way the cyber world is driving us towards processes where the effort is not not concerned with a final product so much as the continuation of the system. However, there is also a fair amount of pretentious content that can be reminiscent of Sokal’s famous hoax - all too often, the sources Finn quotes seem to be using words from the IT world without entirely understanding them.


In terms of readability, What Algorithms Want suffers from same problem as the output of many of the university students I help with writing - ask them what their essay means and what they say is much clearer that what they've written. Finn is overly fond, for instance, of ‘fungible’ and ‘imbricate’, which are not words I'd really like to see outside of specialist publications.


Some of the specifics don't quite ring true. Finn talks about a modern equivalent of Asimov's fictional psychohistory, without covering the way that chaos theory makes it clear that an algorithmic representation of such a complex system could never produce useful predictions (any more than we can ever forecast the weather more than a few days into the future). Sometimes, Finn seems to be complaining about something that isn't a match to reality. So, for instance, he says 'you listen to a streaming music station that almost gets it right, telling yourself that these songs, not quite the right ones, are perfect for this moment because a magic algorithm selected them.' He absolutely misses the point. You don't do it because you think a magic algorithm produces perfection. You do it because you haven't time to spend an hour assembling the perfect playlist for the moment. It's a convenient compromise - and a far better match than listening to a random playlist off the radio.


This reflects a tendency to read too much into an example. For example, despite admitting that Netflix gave the makers of the series House of Cards carte blanche on content, Finn still identifies algorithmic aspects to the script. This comes out particularly when he comments at length on Fincher's idea of having Underwood address the audience direct, apparently not aware that this was one of the standout features of the (very non-algorithmic) original BBC series. Elsewhere, when talking about Uber, Finn says 'The company's opacity about pricing and the percentage of revenue shared with drivers makes it even more Iike an arbitrary video game' - but what conventional business does share this kind of information with its customers? Do you know the markup on products in your corner store, or what a McDonald's franchisee earns?

However, don't let these detailed complaints put you off. There is a huge amount to appreciate here, especially when Finn gets onto individual aspects of the impact of algorithms on our lives in the likes of Siri, Google and Netflix. And throughout there is much to challenge the reader, encouraging thought about technology we tend to take for granted. I just wish that it could have been written in a less obscure fashion.