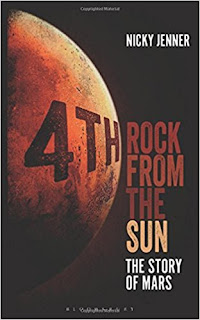 It's rather appropriate that the title of this book seems to be based on the name of the so-so TV show '3rd Rock from the Sun' - like that programme, it shows promise and has plenty of good bits, but as a whole it's rather confused, lacks structure and could have been so much better.

What we have here is a rag bag of everything the general reader might want to know about Mars - or about anything vaguely related to Mars. Nicky Jenner has an engagingly open writing style, although I think the copy editor at Bloomsbury must have been on holiday - I've never known a copy editor let a single exclamation mark through in an adult title, yet this one is littered with them! That did make it feel occasionally as if I was reading a book for children! But it's not!

Getting off my punctuation hobby horse, the good news is that there is lots of genuinely interesting material about Mars here, including stuff I've never seen in a popular science title before. Some of this is in the detail of the geology - how and why the two hemispheres are so different, and the future of the moons, for instance - and some is in the cultural impact of Mars. I've never read a book on the subject that doesn't bring in War of the Worlds as a cultural marker - but I can't remember any waxing lyrical on the subject of Captain Scarlet, a series from the makers of Thunderbirds which I loved as a child (though I had forgotten the Martian aspect until Jenner reminded me).

There's plenty more to like. Jenner takes a realistic view of the various potential attempts to get humans to Mars and points out very firmly how far the concept of terraforming strays into science fiction. She emphasises the difficulties of making the trip (I knew USSR/Russia had suffered failures, but I wasn't aware of the sheer scale of disaster they've suffered with Martian probes). In a chapter called 'The Massive Mars problem' she dedicates far more to the oddities of Mars being a lot smaller than Earth in models of how the solar system formed than I've seen before, highlighting the unexpected nature of this planet (and, arguably, our solar system as a whole).

Unfortunately there are some issues too. Apart from the overall lack of structure, there are some chapters that just didn't work for me. I like a nice bit of tangential material as much as the next person, but chapter 2, titled 'The Wolf and the Woodpecker' and spending time on Mars as a god, astrology and even, somehow, the tarot, seemed too far removed from the topic. As the first chapter is very general, then we get this, I was really feeling 'Get on with it!' with the obligatory exclamation mark by the end of chapter 2. There are a few other chapters where there's the opposite problem of too much information. In one, Jenner goes through pretty well every Mars probe that has ever existed at some length. Similarly, the breakdown of the impact of microgravity on the human body, with around 15 sections such as 'Bones' and 'Blood and urine' just piles in too much detail. Its a mass of fact statements with no flow. Sometimes less is more.

Pulling a view of the book together, that lack of structure comes through very strongly. For the reader, 4th Rock lacks any sense of narrative drive. It presents collections of information on different topics, some fascinating, some rather tedious - but even all those exclamation marks aren't enough to keep a constant level of interest. Most readers will learn plenty about Mars they didn't know already, so it's definitely worth a look. But for me, it didn't work as well as it could have.