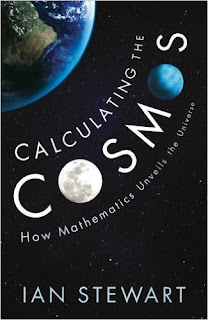 This is a weird one - it's a book where I'm really struggling to identify who it's for and what it is supposed to do. The only conclusion I can draw is that Calculating the Cosmos is intended for people who like Ian Stewart's excellent maths books, but who don't usually read popular science books, so need a maths-driven introduction to astronomy, astrophysics and cosmology.
The particularly odd thing is that despite the subtitle 'how mathematics unveils the universe' there is very little explicit maths in the book - it's mostly just straightforward physics with little prominence given to the mathematical side. And the physics is put across in a fairly heavy handed 'fact, fact, fact...' way - the book is light on narrative throughout. Where it does stray into history there are one or two examples that don't quite get the story straight - for instance, when talking about Newton's development of his gravitational work, Stewart tells us that it took a 'stroke of genius' to see that the Moon is both falling and moving sideways so it misses. What he doesn't point out was that the genius in question was Robert Hooke, not Isaac Newton. This is one of the few points where Newton explicitly says the idea had not occurred to him until Hooke wrote to him about it.
Where the book does stand out is where Stewart delves into something that is usually glossed over in a popular science book. Sometimes this content feels a touch 'so what?' - for example in describing the method used to simulate the formation of the Moon - but in other cases, for example the analysis of how comet 67P got its 'rubber duck' shape, the route of the Rosetta probe, and in probably the best explanation of curved spacetime and manifolds I've seen. Best of all, Stewart explains how dark matter could not exist at all, simply being a matter of making the wrong assumptions in combining the interactions of stars in a galaxy and the way he eloquently dissects the many worlds hypothesis (many of the best bits are towards the end of the book). However, these are standout moments amongst a whole collection of information we've seen so many times before, and when he does explain the science, the approach taken is often not easy to grasp - for example his impenetrable use of Penrose diagrams in talking about black holes.
The story of the Rosetta probe is probably the closest we come to having some narrative to engage us, but even here the storytelling is bland, and, from a mathematical standpoint, we miss the opportunity to look at a different kinds of mathematical involvement, as there was interesting work done on the scheduling of Rosetta's experiments to deal with the very limited communications bandwidth.
This isn't a bad book, but apart from those handful of highlights where something is explained better than elsewhere, most of it fails to bring in anything new and lacks the engaging writing style of, say, Stewart's books written with Terry Pratchett. Here Stewart rarely makes use of mathematical insights to tell us anything different to straightforward familiar astronomy and cosmology, which is a shame as he is so excellent at making maths interesting. For the science, though, we get this distinctly 'here's a fact, here's another fact, here's yet another fact' style of writing. It might work as a book for that maths-based space newcomer, but I'm afraid its not for me.