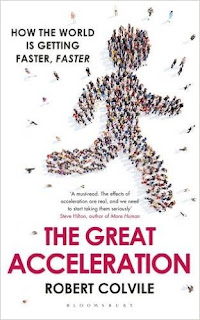 With the subtitle 'how the world is getting faster faster', this is a Gladwellesque exploration of the way that, primarily driven by information and communication technology, we are getting increasingly frantic. And yet, somehow, Robert Colvile (or Collie as my spellcheck insists on calling him) argues that this is a good thing. Arguably, the mark of the book is how persuasive he is in his cheery acceptance.

In echoing the books of Malcolm Gladwell, I am referring more to a fast paced (appropriately) throwing in of examples, overwhelming the reader with context - but I'm glad to say that Colvile is much better at acknowledging sources as he goes.

In each of the main chapters, Colvile takes an area of life - socialising, art, news, politics, finance etc. - and looks at the way that our increasingly high speed, always on, connected world has radically transformed the nature of each area. The format tends to be very much the same chapter to chapter - so much so that it was getting a little samey by the end - in each case we first discover all the scary and worrying implications of acceleration... then Colvile tells us why it's actually okay, or, rather, better than okay because the benefits outweigh the risks.

One big message is something the publishing world has been aware of for a long time - but Colvile makes a convincing argument that this will be the case in all fields - the squeezed middle. In publishing, there used to be a healthy living as a midlist author. Now you are either a bestseller writer or earning peanuts. (And that mostly means earning peanuts.) The same applies all over, Colvile suggests. One side effect of the acceleration is the tendency to have megaplayers and tiddlers and very little in between.  And as Colvile points out, although the idea of the 'long tail' has been around a while, it's a lot longer and thinner than was first predicted. Meanwhile the Disneys and Apples and Googles and Amazons of this world trample over everything. This is quite scary - as Colvile points out, this process inevitably results in massive loss of good midrange employment, leaving a few very high paid placements and a lot of minion jobs.

This makes it difficult to be totally supportive of Colvile's enthusiasm for the process, and sometimes the examples given entirely fail to convince. In the news section, for instance, after showing the decline in traditional news reporting, Colvile holds up Buzzfeed (where he used to work) as an example of how things are actually better now. No, really. He says 'it's easy to mock Buzzfeed's viral news posts if you have not seen the craft that goes into them' - but this is a bit like arguing that something is crap, but it's still wonderful, because it is beautifully polished crap.

Similarly on the news agenda, the book is full of enthusiasm for the wonders of citizen journalism, but there's very little about the way that the vehicles for this process control the agenda. And though Colvile does acknowledge the increasingly strong effect where we tend only to see news and views that agree with our own viewpoint, he dismisses this as being insignificant. Yet I don't see anything in his description of the future of news that gives the degree of balance of something like BBC News - yes, they get it wrong sometimes, but they are trying to be balanced, which is absolutely not the case of the examples given as the future of news reporting.

I am sometimes criticised in my books for being overly positive about the impact of science and technology on the future, but Colvile takes this to the extreme, time and again putting up really worrying outcomes of the ICT acceleration - and then dismissing them with counter-arguments that have far less weight. Yes, in some cases the counter arguments are convincing - for example in the impact of social media on young people. But in some areas, such as finance and politics, the 'positive spin' end of the chapter really leaves a lot to be desired. At the time of writing we're discussing possible UK exit from the EU and there is so much uncertainty in the benefits and risks it's difficult to make a decision. The same was the case with the pros and cons of acceleration.

It doesn't help that occasionally Colvile comes across as very much someone with high tech London-based blinkers. For example, he makes the remark 'Services such as Uber... will bring the taxi of your choice to you at the moment of your choice... Particularly in cities ' - no, that would be only in cities at the moment. Us hicks don't have Uber.

Although I was not convinced by many of Colvile's 'it will all be fine in the end' arguments, I still very much liked the book. He has an easy, readable style with a Transatlantic tone, but British enough that it doesn't feel like something imposed on a UK reader by a US guru. In a way, the solutions are not the issue. What matters here is that Colvile is bringing up in area after area of our everyday lives how speeding up is changing us and what we do. Some of it you may well like (I certainly do). Some - particularly his bizarre generalisation that we don't really care about eating any more and would prefer to just shovel in anything as long as it's quick - doesn't really work. Some - for instance the way the financial system is pretty much out of human control - should scare the pants off us. But all of it is worth discussing. That's what makes this book so valuable. All this stuff is happening, and apart from complaining about teenagers' inability to concentrate on one thing, we tend to ignore it. Colvile opens our eyes - and that is an essential service.

Ironically, given the subject, at the time of writing this review, the accelerated version (Kindle) is more expensive than the hardback.