Beyond Zero and One - Andrew Smart *** 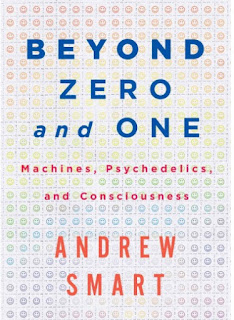 This is an unusual book, in a small pocket-sized format that reminds me of the old science fiction doubles pocket books. Apart from their small size, these books had a special trick up their sleeve, because when you flipped them over, the back was a cover for a different book - each copy held two books, starting from opposite ends. Beyond Zero and One may be a single title, but it too has very different topics that Andrew Smart wants to convince us go naturally together: artificial intelligence and the drug LSD.

As we go, in a rather rambling fashion, in the first topic, Smart takes us through the nature of artificial intelligence, how likely it is that computers could become truly intelligent and/or conscious and explores a little of the nature of consciousness himself. As far as the second goes, we get a really interesting description of his one and only LSD trip, details of its chemical structure and possible method of the drug's operation, its history and how it has been used. However, these two parts to the book are not structurally separate, but interwoven.

So what's going on here? Why are these two apparently unconnected things together? Because Smart believes that an LCD experience is not a true hallucination, but rather an opening up of the subjective side of our perception. He thinks that the ability to have this kind of altered perception is a fundamental aspect of consciousness (I think - his arguments are not all very clear), and as such, if we could give LSD to a supposed AI (he doesn't propose a mechanism for doing this, as there would be much point simply dripping the chemical substance into it), then it would give us great insights into the nature of consciousness and intelligence. Quite why, I'm not really sure.

Each of the two significant parts of the book has some genuinely interesting bits. I didn't know much about LCD, and that aspect is highly informative, while some of the sections on intelligent computers are genuinely fascinating. When, for example, Smart counters the assurance of the likes of Ray Kurzweil that true AI is just around the corner and will be stable and problem free, Smart points out the dangers of Byzantine faults, which stress error correction mechanisms to the point of collapse and could ensure that any computer capable of intelligence was unable to run without failure.

The problem with the book is that it is difficult to uncover any good reason for putting the two topics together. Smart makes arguments from the Kantian idea that we can't perceive reality, just a subjective model of it. This is clearly true to a degree. For example, what we see as our visual field, looking out on the world, is assembled from a set of inputs of things like shapes and shades - it's not a camera view, which is why optical illusions occur and we don't notice saccades where our eyes jerk around. However Smart has a tendency to go too far with this to asserting that perceptions are no different from hallucinations, as our waking experience is a construct of the brain.

The trouble with this approach is that we have far too good an agreement over how we interpret what we perceive for it to be subjective enough to draw the parallels that Smart makes. For example, he says that colour does not exist outside our brains saying 'the redness of the apple is entirely constructed in your brain.' In reality it's only partly constructed in the brain. The colour of an object is a response to the energy of photons it emits - in the case of this apple, they are in the range of the spectrum identified as red. The fact that the red light is far more intense on a sunny beach than on your desk on a rainy day, which Smart uses to suggest that colour is purely subjective, is about number of photons, not photon energy. And that is not subjective.

In making the steps he has to take to link his topics, Smart goes too far in attempting to show that all perception is subjective. We all, after all, agree that what perceive as a cliff is a cliff. It's not subjective, and anyone who argues otherwise is welcome to walk off it to prove otherwise. There are also rather too many assumptions made. At one point, for instance, Smart claims that 'a strong AI would have to be conscious' - but he doesn't justify this in the face of, for instance, the evidence that the vast majority of brain activity is unconscious.

I was also a little worried that someone writing a book with computing at its heart could make as fundamental an error as to say that the IBM Watson computer has '80 teraflops of memory and 15 terabytes of RAM.' No - RAM is memory, and teraflops is a measure of the number of floating point operations the computer can make in a second: it has nothing to do with memory.

Despite the flaws in the book, there's much to get you thinking about the nature of artificial intelligence and consciousness (plus that second topic of LSD, which is also eye-opening if you have no experience of the culture that might use it). Beyond Zero and One is a thought provoking book - it's just that a fair amount of the time, the thoughts provoked may not be in agreement with those the author wants to promote.