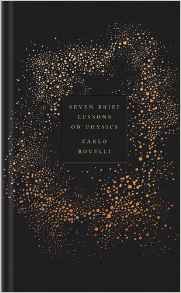 This strikes me as the kind of book that would really impress an arts graduate who thought it was giving deep insights into science in an elegant fashion, but for me it was a triumph of style over substance - far too little content to do justice to the subject. It is, in effect, seven articles strung together as a mini-book that can be read comfortably in an hour, but is priced like a full-length work.
Don't get me wrong, Carlo Rovelli knows his stuff when it comes to physics and gives us postcard sketches of a number of key areas, mostly in the hot fields like cosmology and quantum gravity (though interestingly focussing on the generally rather less popular loop quantum gravity). However he's not so good on his history of science, and can, as scientists often do when writing for the general public, over-simplify.
The last of the articles is different from the rest - rather than take in a specific field (quantum physics, say) as the earlier articles do, it looks at how people and science interact. In some ways this is the freshest and most interesting part of the content... it's just hard to see why it's a 'lesson in physics.'
This book came across to me like a taster menu from a fancy restaurant. It will certainly hit the mental tastebuds, and contains a number of delights - but it is insubstantial and leaves you wanting far more. I can see the title doing very well as a gift book. It looks pretty and is handsomely bound, but there are plenty of better options out there if a reader really wants to be introduced to the wonders of modern physics.