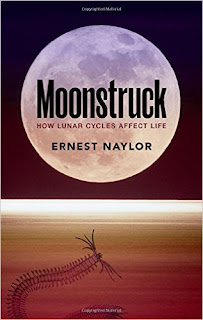 There is something uniquely beguiling about the moon. The sun might be the serious luminary power source of the solar system, but it is simply too bright to be aware of any detail without specialist equipment. But everyone can admire the full moon in all its glory. In writing Moonstruck, subtitled 'how lunar cycles affect life', Ernest Naylor keeps us very aware of this human awareness of the moon, constantly throwing in moon myths and beliefs alongside detailed information on the way that the moon, and more often its indirect influence through the tides, influences mostly aquatic behaviour.

While Naylor is sticking to sealife he is on home territory and authoritative, though for the general reader there is perhaps rather too much cataloguing of how various species behave or mate or whatever in subtly different ways dependent on the phase of the moon and the state of the tides.

Where things get a lot more slippery is when Naylor moves onto land animals, and particularly humans, where the general feeling seems to be that most studies show no evidence of an influence. When there is an apparent correlation, there is usually a conflicting study that doesn't agree. This topic seems to have the same problem that ghost hunters have with taking a scientific approach. In the scientific method, the null hypothesis is interesting in its own right. If, for instance, physicists discovered that there were no gravitational waves, it would have a major impact on general relativity and would be fascinating (and possibly Nobel Prize winning). But if ghost hunters consistently discover no ghosts, they just get dispirited. (Sorry.) So there is a higher than usual temptation in such circumstances to cherry pick data to support the researcher's desired outcome. Unfortunately the whole business of finding ways that the moon might influence sleep patterns or libido or whatever seemed exactly the same. A field where enthusiasts are in search of supporting evidence.

It didn't help that Naylor repeatedly told us that 'sceptics think this' and 'sceptics would point out there is no evidence yet' which began to grate after a while. Throw in a decidedly dubious timing of the Big Bang at 9.5 billion years ago, plus a surprisingly short book for an £18.99 hardback, and we have something of an oddity that read less like a commercial popular science book and more like a personal project.