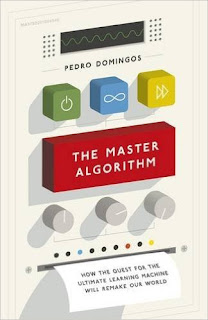 I am really struggling to remember a book that has irritated me as much as this one, which is a shame because it's on a very interesting and significant subject. Pedro Domingos takes us into the world of computer programs that solve problems through learning, exploring everything from back propagating neural networks to Bayesian algorithms, looking for the direction in which we might spot the computing equivalent of the theory of everything, the master algorithm that can do pretty much anything that can be done with a computer (Turing proved a long time ago that there will always be some things that can't). As the subtitle puts it, this is the quest for the ultimate learning machine that will remake our world.

So far, so good. Not only an interesting subject but one I have a personal interest in as I had some involvement in artificial intelligence many moons ago. But just reading the prologue put my hackles up. It was one of those descriptions of how a technology influences every moment of your life, as the author takes us through a typical day. Except 90% of his examples have only ever been experienced by a Silicon Valley geek, and those that the rest of us have come across, like algorithms to make recommendations to you on shopping websites and video streaming sites, in my experience, are always so terrible that they are almost funny.

The pain carries on in part because of a kind of messianic fervour for the topic that means that the author seems convinced it is about to totally takeover the world - and like most fanatics, he presents this view while viciously attacking everyone who disagrees, from the likes of Marvin Minsky and Noam Chomsky to Black Swan author Nassim Nicholas Taleb. It's interesting that Domingos is totally dismissive of the early knowledge engineers who thought their methodology would take over the world, but can't see that his own pursuit of the 'master algorithm' (think of Lord of the Rings, but substitute 'algorithm' for 'ring') is equally likely to be a pursuit that is much easier to theorise about than to bring to success.

To make matters worse, Domingos repeatedly claims, for instance, that thanks to learning algorithms it's possible to predict the movement of the stock market, or to predict the kind of 'black swan' events that Taleb shows so convincingly are unpredictable. Yet I have never seen any evidence that this is true, it seems to go totally against what we know from chaos theory, and Domingos doesn't present any evidence, he just states it as fact. (Could you really have predicted the existence of black swans before they were discovered? How about blue ones?)

One other problem I have with the book is that the author isn't very good at explaining the complexities he is dealing with. I've seen many explanations of Bayesian statistics over the years, for instance, and this was one of the most impenetrable I've ever seen.

I can't tell you to avoid this book, because I've not come across another that introduces the whole range of machine learning options in the way that Domingos does. But any recommendation has to be made through gritted teeth because I did not like the way that information was put across.