The Future of the Mind – Michio Kaku *** 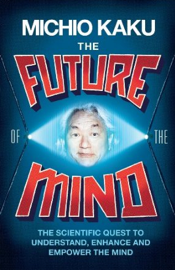 Physicist Michio Kaku, an expert in string theory, might not seem the obvious person to take us on a tour of what the subtitle describes as ‘the scientific quest to understand, enhance and empower the mind.’ But Kaku is a very experienced science communicator and though I didn’t feel the same deep connection with, and love for, his subject as comes across in his physics-based books, there is certainly a lot to ponder in this reasonably chunky bit of scientific futurology.
Of all the great science popularisers – and I don’t hesitate to put him in that bracket – Kaku is the most deeply immersed in the science fiction tradition. For every example of a scientific idea he has a story to put it into context, which if you like SF, as I do, is a great asset. The only slight problem this makes for is that when Kaku extrapolates a piece of current technology into the future he tends to oversimplify the problems and goes far too far. So, for instance, an experiment where monkeys are led to feel the sense of touch from a remote sensor leads us to Kaku prompting an interviewee to say ‘I think this is the first demonstration that something like the [Star Trek, the Next Generation] holodeck will be possible in the near future.’ This is almost the definition of hyperbole. My suspicion is that physicists make better science fiction writers than futurologists.
Throughout the book we visit different aspects of the brain and the mind and how they might in the future be enhanced. This often involves finding out more about current brain conditions and injuries, as these have frequently resulted in discovering more about the workings of this most remarkable organ. Kaku quotes a mind-boggling example of a patient with a split brain. Without the usual connection of the corpus callosum, the left and right sides of the brain can hold different opinions and have different feelings. We hear of a patient whose left brain was atheist and right brain was a religious believer – a quite remarkable state of affairs. The ‘learning through damage and illness’ bit is necessary, but after a while, hearing about all these failings of the brain does get a little wearing.
Along the way we experience mind-to-mind communication, mind controlling machines, intelligence enhancement (though strangely with hardly any overlap with Smarter), artificial intelligence, disembodied minds and more. There’s a lot of good material here, but somehow I found reading it a little too much like hard work, rather than the feast of ideas we often get in one of Kaku’s books. Interesting, but not one of his best.