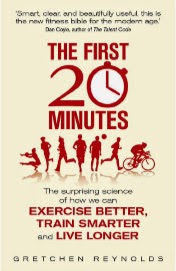 Anyone who knows the reviewer would raise an eyebrow about my reading a book on how to  exercise better, but this is subtitled ‘The surprising science of how we can exercise better, train smarter and live longer’. Gretchen Reynolds delivers an impressive balance between exploring scientific studies in the area of exercise and practical guidance for everyday folk.
One problem with studies in health and fitness is that it isn’t always easy to tell the difference between a small subjective study with insufficient data to draw an significant conclusions and large studies that have been replicated and confirmed in their findings. It is also often quite difficult to distinguish pick out where the link between exercise and health is causal and where it is just correlated (i.e. statistically linked in some way, but the exercise didn’t actually cause the health benefits, because, say, people who do this exercise also tend to have a better lifestyle). Reynolds is reasonably good in this respect, usually making it clear where a study is insufficient to draw concrete conclusions, but the lack of certainly on the quality of the data in some cases is probably the weakest aspect of the findings.
Even so, this is a very readable book, perhaps particularly for someone who hates exercise. It also delivers a fair number of surprises – for instance that static stretching is actually damaging rather than beneficial, and that Andy Murray’s famed ice baths are nothing more than a placebo. Sorry, Andy, won’t be joining you. Whether you are interested in the science of the human body or want to improve your fitness with minimum effort, this book is well worth a look.