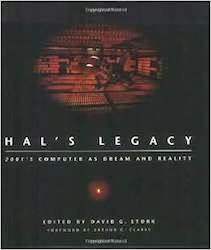 For me, 2001 was the first (and still one of the only) science fiction films that comes close to being accurate in its science. And without doubt, the movie-stealing character (certainly the most emotionally ranging character) was the computer, HAL.
This is an old book, dating back to the late 1990s, but still fascinating in the way that it uses the different aspects of HAL to look at how the real technologies have developed in comparison with the way they were envisaged in the 1960s film. It’s in the format of a series of articles by different authors. Amongst my favourites was the AI overview by Marvin Minsky, who was on set part of the time (and nearly killed by a flying spanner) and the discussion of HAL’s game of chess, reflecting on the way he plays chess like a person, rather than in the manner of a chess-playing computer like IBM’s Deep Blue.
Inevitably it’s a bit dated in places – but surprisingly little, considering how computer technology has moved on since the late 1990s. Also it’s probably a touch too academic and obsessed with every fiddly detail to make it acceptable as a general read (which is why I’ve only given it three stars). But if, like me, you were overwhelmed at the time by 2001, and are still impressed by it, this is a book of delights.