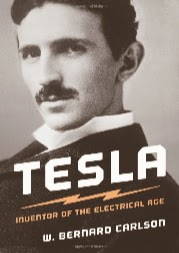 I’ve reviewed two biographies of the engineer and inventor Nikola Tesla: Man out of Time (which is good on Tesla’s odd behaviour but struggles with the science) and Wizard (which is a more rounded book, but is totally lost in the science, telling us that Telsa was close to splitting the electron). This is definitely the best of the three. Certainly it is far better on the aspects of Tesla’s work that are worthwhile – his engineering genius in working on AC motors and polyphase AC, giving comprehensive details of his designs and work.
There is also plenty on his long obsession with transmitting information and electrical energy remotely, culminating in the remarkable Wardenclyffe development with its iconic discharge tower, which ruined him financially and proved his downfall when he was unable to deliver on his promises to be able to span the Atlantic in six months to financier J. P. Morgan. By contrast, though, some of his more wild schemes and his social oddities are only discussed in passing – Carlson hints at the possibility that Tesla was homosexual, which would have been controversial in his day, but hardly mentions his strange eating habits and pigeon-befriending activities. I’m not sure the balance is quite right. This is after, after all a biography, and we  get a rather sketchy picture of Tesla, the man. It may be because Carlson struggles with that side of biography – we hear, for instance, the strangely childlike line that his father died because he was heartbroken. But any shortcomings on the personal front are more than made up for by the exquisite detail on the engineering achievements.
There was one other aspect I was uncomfortable with, which was that Carlson seemed to find it difficult to admit when Tesla was wrong. The facts seem to be that Tesla was a brilliant engineer, but only a so-so scientist. It’s not an unusual combination, and Tesla often managed to develop technology by trial and error without understanding the underlying physics. Specifically he had a poor grasp of the nature of electromagnetic radiation, leading to his odd ideas of being able to transmit electrical energy as a form of vibration through the Earth. While Carlson makes it clear Tesla didn’t succeed he avoids saying that Tesla failed to understand the science, using phrases like ‘raises questions about its feasibility’ in a situation that demands ‘it was just never going to work.’ There is also reasonable evidence that many of Teslas promises of being able to develop technology were nothing more than evasions to put off his creditors or pure fantasy – again Tesla gets too much benefit of the doubt.
Overall, though this is an enjoyable biography of Tesla, concentrating in detail on his engineering achievements and business arrangements, even though it could have been firmer on the unscientific nature of some of Tesla’s ideas.