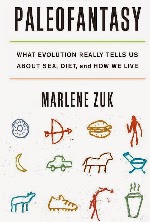 We all enjoy seeing smug people who tell us how to live being taken down a peg, and in Paleofantasy, subtitled ‘what evolution really tells us about sex, diet and how we live’, Marlene Zuk lays into those who promote a ‘paleo diet’ or ‘caveman lifestyle.’ As the book entertainingly makes clear, these concepts are based on a total misunderstanding.
The idea behind the paleofantasy, particularly popular, it seems, among the New York chatterati, is that we ought to try to live more like our Palaeolithic forebears, because this was the lifestyle and diet we evolved for, where now we live in a very ‘unnatural’ environment. Zuk tears this idea to shreds, showing how evolution doesn’t evolve ‘for’ anything, how we weren’t particularly well matched to our Palaeolithic environment anyway, how we’ve evolved since and how the ideas of what, for instance, people of that period ate are wrong both because, for instance, they did seem to eat grains, and also because they weren’t a single population in a single environment, but actually had many, widely differing lifestyles.
This much is brilliant, but the reason I can only give the book three stars is that it really does feel like this part of the content is more a long article than a book, so it then had to be stretched. This produces a couple of problems. One is that Zuk keeps going back to what the people on ‘Caveman’ forums and the likes say, to compare with the science, and after the initial fun, we don’t care. It’s a bit like writing a book on climate change and using the non-science that Nigel Lawson puts forward all the way through as a straw man, rather than briefly mentioning and dismissing it at the start. It gives the paleofantasists who are, after all, a tiny minority, particularly outside the US, more weight than they deserve.
The other problem is that to fill it out there is an awful lot about the specifics of human evolution (or not) and what we can learn from genetics about our behaviour and illnesses and so on that somehow doesn’t quite work. Unlike the early, fun part of the book, it becomes a less interesting read. Perhaps it’s just me, but I couldn’t get engaged with the material.
Don’t get me wrong, there is lots of interesting science in there, from the genetics of different forms of earwax (though this mostly seems to be in to make a good chapter title, as when it comes down to it, the story is rather uninspiring) to the origins and nature of the structure of the human family, but the way it is presented just didn’t get me excited. It’s a book that’s well worth reading, nonetheless.