Out in the dice world - Brian Clegg - Feature 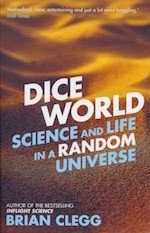 I’m delighted that my book Dice World has made it to the long list for the 2014 Royal Society Prize for Science Books. Like all those on the long list, I’m now juggling probabilities of getting further in my head, so I thought it would be interesting to share a little part of Dice World on the matter of casinos and probability – specifically the iconic game of roulette.
There was a time when casinos were, frankly, another world for the vast majority of us. I remember walking past one on the way to school in Manchester and it seemed a totally alien concept – something I had only seen in Bond films. But now you can’t watch a digital TV channel without being bombarded with advertising for online casinos. The availability of internet gambling has changed the casino from an exclusive building most of us would never enter, to a game that’s on everyone’s phone. And of course, there is likely to be roulette in there. So what’s it all about?
A roulette wheel is a rather crude random number generator, which generates a value by sending a ball around the outside of a spinning wheel. There are eighteen black and eighteen red slots on the roulette wheel into which the ball can drop, so if we ignore for the time being the green 0 or 00 slots, there should be an 18⁄36 (or 1 in 2) chance of winning if you bet on either black or red. Another way of putting it is that there is a 50:50 chance of winning or losing. This isn’t a safe enough bet for casinos, which as businesses want to make sure that they will get a profit. So they add a zero slot (often there are two of them on wheels in the US). If the ball ends up in this slot, no one wins but the casino. It should be crystal clear for players what this means – long term, the casino will win.
But of course this doesn’t mean that lucky players can’t clean up – as long as they stop while they are ahead. And in principle, that luck may be helped by a physical error. A roulette wheel is a physical device, and as such is not a perfect mechanism for producing a random number . Although wheels are routinely tested, it is entirely possible for one to have a slight bias – and just occasionally this can result in a chance for players to make a bundle. It certainly did so for 19th-century British engineer Joseph Jagger, who has, probably incorrectly, been associated with the song ‘The Man Who Broke the Bank at Monte Carlo’, which came out around the same time as Jagger had a remarkable win in Monaco.
The song probably referred instead to the conman Charles Wells, who won over a million francs at Monte Carlo and did indeed ‘break the bank’. (This doesn’t mean that he cleaned out the casino, simply that he used up all the chips available on a particular table.) There were many attempts to find how Wells was cheating, but he later admitted that it was purely a run of luck, combined with a large amount of cash enabling him to take the often effective but dangerous strategy of doubling the stake on every play until he won.
However, Jagger probably deserves the accolade more than Wells, as his win was down to the application of wits rather than luck – and was even more dramatic. Jagger finally amassed over 2 million francs – the equivalent of over £3 million (or US$5 million) today. He hired a number of men to frequent the casino and record the winning numbers on the six wheels. After studying the results he discovered that one wheel favoured nine of the numbers significantly over the rest. By sticking to these numbers he managed to beat the system until the casino realised it was just this wheel that was suffering large losses and rearranged the wheels overnight. Although Jagger soon tracked down the wheel, which had a distinctive scratch, the casino struck back by rearranging the numbers on the wheel each night, making his knowledge worthless.
Sadly, for would be modern-day Jaggers, casinos are now a lot more careful about testing their wheels to ensure this kind of thing can happen, while online casinos don’t rely on physical devices, but instead use computer-generated random numbers, or more likely pseudo-random numbers. Numbers that are random enough for gambling, but that aren’t good enough if you want a good long sequence of numbers that are truly random for scientific purposes. That is because the pseudo-random number generator is not genuinely picking between the options with equal probabilities, nor is any value in a sequence of numbers it generates totally independent of what came before.
That has to be the case or we can’t calculate the random number using some sort of computer algorithm. A pseudo-random generator usually starts with a ‘seed’, an initial value which is often taken from the computer’s clock, and then repeatedly carries out a mathematical operation, typically multiplying the previous value by a constant, adding another constant and then finding the remainder when dividing by a third constant. So, for instance, a crude pseudo-random number generator would be something like:
New value = (1,366 × Previous Value + 150,899) modulo 714,025
where ‘modulo’ is the fancy term for ‘take the remainder when you divide it by …’ The output of the pseudo-random number generator wanders off away from the seed value and can be reasonably convincing in appearance, but it will always produce the same values given the same seed, and can’t match a true random number generator for effectiveness of results. Even with pseudo-random numbers, though, the implications are clear. There are no winning systems. You can’t beat the system. By all means play the game – but be under no illusion about what’s happening.