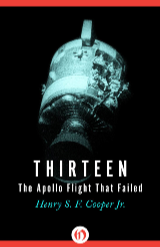 Most of us probably think we know all we need to know about the Apollo 13 mission – after all, we’ve seen the movie (which isn’t bad at all) – but inevitably the Hollywood treatment skims over a lot of fascinating detail, while this book, written just two years after the event, gives us the true nitty gritty.
I found it absolutely fascinating, seeing the disaster unfold in slow motion, with all the messiness of real life. For instance, the ground controllers, unaware that an explosion had taken place and had disabled a lot of the equipment went quite a while making incorrect assumptions, still hoping they could get the mission to the moon. In fact what the book makes clear is that in some ways the astronauts were just bit part players and it all the different individuals on the ground who were making the decisions and calculations and generally trying to sort things out.
On the whole this works very well – by relaying the conversations on the ground, the arguments between the different specialists and so on, we get a real, in-depth feel of what really happened here. This makes it a genuine page turner, as the reader feels to be present as the disaster unfolds. The only downside of this is that we are showered with with acronyms for all the different controllers, referred to, for instance, as CAPCOM, TELMU, FIDO, EECOM, GUIDO, RETRO and so on. To add to the confusion, because there are four shifts of controllers, there are four persons per title, leading to a cast that it is very difficult to keep sorted in the mind.
I have two niggles with the book – one small and one significant. The small one is the author’s affectation of spelling re-entry as reëntry, which is for some reason very irritating. The big one is the science, which the author clearly hasn’t got a clue about. Two specific examples. He says ‘One amp-hour on the spacecraft’s twenty-eight volt current (sic) would keep a 40-watt bulb burning for one hour.’ Anyone with high school science should be able to see at least two things wrong with that. But the biggest howler is ‘so it was difficult for the computer to work out vectors, a vector being a point in space where the spacecraft was known to have been’. It’s not rocket science. Well, okay, it is rocket science, but it is not exactly postgrad physics to realise that a vector is not a point in space.
The book doesn’t suffer particularly from its age – in fact it is only apparent in two ways. One is that it thinks the computers of the day are impressive bits of kit (dwarfed as they now are by any smartphone), and the other is that when the book was written it seems that one of the most iconic quotes of modern times (misquoted though it often is) had not become well-known. There is no direct reference to Swigert’s ‘Okay Houston, we’ve had a problem here.’ (Or Lovell’s near repeat ‘Houston, we’ve had a problem.’) All Cooper says is ‘First, Swigert reported over the radio that the seemed to have a problem.’
Although I can only give it three stars because of the bad science, I have no doubt that anyone interested in the history of space flight should give this book a go.
Note, paperback is original 1972 edition while Kindle is a new edition