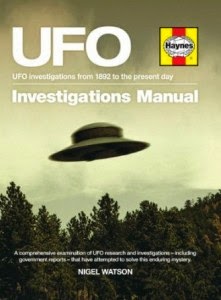 Buying a Haynes manual is a rite of passage for young car enthusiasts in the UK. These detailed illustrated guides tell you how to service a particular make and model of car. But of late there has been something of tendency to spread the field into entertainment, with manuals on the likes of the USS Enterprise and the Death Star, and more bizarre how-to subjects, including the Zombie Survival Manual.

So, almost inevitably, we get the UFO Investigations Manual. In a sense it is a bit of misnomer. Although there are a couple of pages of appendix on how to make a UFO report, this primarily isn’t a how-to guide at all, but rather an illustrated assessment of UFO history and attempts to explain them.
I ought to say straight away that this less wide-eyed and trusting than UFOs Caught on Film, which merely shows photographs and comments on them with little attempt to rule out alternative causes. There is a section here on non-extra terrestrial causes, for instance. But it doesn’t stop the book repeatedly showing pictures with decidedly overdramatic captions (‘Glastonbury Tor: is it a portal into other dimensions’) and quite often very obvious explanations are not well explored. So, for instance, there is a section on mysterious ‘waves’ of sightings without making the obvious suggestion that people see things because they have heard other people see things. Similarly, the totally discredited concept of hypnotic regression is cited a couple of times as helping people recall abduction incidents without pointing out there is very strong evidence that the technique creates memories rather than restoring them. 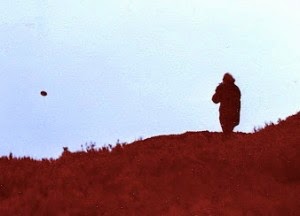 One of my UFO fakes
Similarly, though there is quite a lot on the latest ways that UFO photos can be faked (there’s an app for that – really), there is very little about why and how many of the ‘classic’ photos that weren’t simply misunderstood natural phenomena or planes could easily have been faked. I did my own bit of UFO photo faking in my teens just for fun and it very obvious (though I didn’t see it mentioned in the book) that the very easy approach of throwing a metal disk tends to produce exactly the sort of odd flight angles often shown for flying saucers. I have included one of my own efforts here – it is a metal camping plate, thrown frisby style.
Most important of all, the manual lacks the feeling of that old science mantra ‘data is not the plural of anecdote.’ It gives no suggestion that extreme theories require extreme evidence, where Occam’s Razor makes the obvious assumption that UFOs aren’t extra-terrestrial without good evidence that they are. So as science it doesn’t do very well – but it is an entertaining subject, put across in an appealing and entertaining way in this well illustrated volume. Read it like the Zombie title and you are fine – but don’t take it as seriously as you would the Ford Fiesta 1995-2002 manual, because it just isn’t that sort of book.