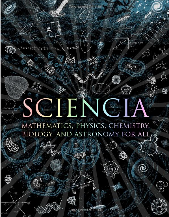 This compact but chunky 400 page book packs in six different titles covering an eclectic if not entirely logical combination of topics (with authors whose names seem almost made up). We have Burkard Polster on mathematical proofs, Matthew Watkins packing in useful mathematical and physical formulae (sounds a laugh a minute), Matt Tweed on both the periodic table and the cosmos, Gerard Cheshire on evolution and Moff Betts on the human body.
Each of the mini-books inside consists of a series of two pages spreads, which given the relatively small size of the book and the fact that the right hand page is all illustration, means that there is relatively little space for text. This is an adult equivalent of the Basher books, but thankfully without the irritating tendency to allow the topics to address the reader in the first person.
I think it is fair to say the approach works better for some topics than others. Of the two maths sections, the first on proofs is a lot more readable than the second on formulae, which ends up classically dry and unapproachable. The highlights for me were Matt Tweed’s two entries, which were both approachable and enjoyable. Of the two, I think because the topic was better suited to the format, my favourite was the periodic table. That leaves the two biology based mini-books, which were fine but a little worthy, particularly the one on evolution.
Overall, then, not a bad little book, but as always with these highly illustrated two-page spread tomes I wonder what it is for. It would be very dull to read through from cover to cover – it has to be for dipping in. As a loo book, perhaps? It would probably be best seen as a gift for someone who has a slight interest in science, but doesn’t know much yet (otherwise the science sections might be a bit simplistic).
The book is nicely made, though the old-fashioned looking illustrations left me cold. I really don’t understand the quotes on the back like ‘Mesmerising’ from the Guardian (unless the original review said ‘The pattern on the cover is mesmerising’). It is a passable book indeed, but any tendency to be put in a trance would come from the repetitive format not the wondrous content.