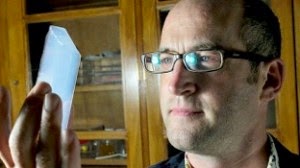 Mark is an engineer and materials scientist. He is the Professor of Materials and Society at UCL where he teaches and runs a research group. His research areas include self-assembling materials, self-healing materials, psychophysical properties of materials. Mark is the Director of the Institute of Making which is a multidisciplinary research club for those interested in the made world: from makers of molecules to makers of buildings, synthetic skin to spacecraft, soup to clothes, furniture to cities. Mark is a broadcaster and writer on science and engineering issues, and believes passionately that to engineer is human. He gave the 2010 Royal Institution Christmas Lectures, and is a regular presenter of science and engineering BBC TV programmes. Mark’s first book is Stuff Matters.
Why science?
I got stabbed, and became obsessed. Not with science, but first with knives and then the stuff they were made from. I noticed materials everywhere and went a bit mad, they call it OCD these days. Everything is made from something I realised, but noone talked about those somethings…and well, I wanted to know what they were. Materials Science which is the systematic study of how physics, chemistry, biology and engineering create stuff, caught my attention, and thats what I do.
Why this book?
Materials Science is not the whole story about stuff. It took me twenty years to really understand that, and so thats why I wrote the book, to show that materials are more than technology, they are a kind of reflection of who we are as a society. The ages of civilisation are named after materials: the stone age, the bronze age, the iron age, and so it is now, only its a lot more complicated. Unpicking where all this stuff came from and what it means is the point of my book.
What’s next?
Along with a very talented team at UCL we have created an institute that is a physical embodiment of the philosophy of the book. Its called the Institute of Making. We aim to show that making is not just technologically important, but also is an important part of being human.
What’s exciting you at the moment?
The maker movement is really getting going, Fab labs, Hack Spaces, MakeSpaces are all coming to a neighbourhood near you soon!