The Spark of Life – Frances Ashcroft **** 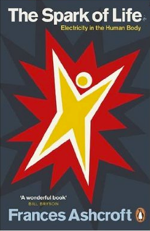 I think most of us are aware that the human body uses both chemical and electrical signalling to control its inner functions, but until I read this book I had certainly never realised that extent to which a rather strange electrical process (strange because it involves the flow not of electrons as in ‘normal’ electricity, but of ions) is handled by ion channels.
After a preface that is a little confusing as she uses terms that aren’t really explained until later, biologist Frances Ashcroft, who spends her days working with ion channels, gives us a brief introduction to electricity. This physics part is by far the weakest bit of the book. For example she doesn’t differentiate between a flow of electrons and the electromagnetic signal in a wire – and some of the history is a little out of date (she says, for instance, that Franklin did the ‘kite in a thunderstorm’ experiment, which is thought unlikely now). But this is only an introductory phase before we get into the meat of the book, which is quite fascinating.
Ashcroft explains how ion channels can open and close to allow a flow of ions through, and how electrical energy is involved in making these essential cell components function. This is absolutely fascinating from the first mention of sodium pumps (I was hoping to come across the medication type proton pump inhibitors, which like many thousands of people I take, but if they were mentioned I missed it). It is remarkable how this essential part of cell function wasn’t properly understood until around 50 years ago.
For the rest of the book we are taken on a tour of the body and the way that ion channels have a powerful influence on everything from poisoning to the functioning of memory. It is quite mind-boggling just how much these tiny channels do for us – always dependent on that electrical motive power.
For me – and it is fair to say that my biology tolerance is pretty low – the book did get a little repetitious in some ways, if only because of the central role of ion channels throughout. I suspect, though, for many, the connection with the functioning of the human body will keep that interest going – and Ashcroft has a light, approachable tone and makes sufficient ventures into the wider picture to keep the reader on-board. Overall a subject that clearly needed writing about, carefully and entertainingly revealed.