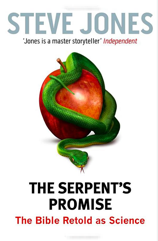 There are broadly two ways to write a popular science book. One is, like my book Gravity, to pick a specific aspect of science and really dig into it. The other is to use a theme that allows you to explore a whole range of different scientific topics. I confess I’ve done this as well with the likes ofInflight Science and The Universe Inside You and the approach can be very effective. But there has to be a reason for choosing the framework – and I find Steve Jones’ hook in this particular book – the Bible – a little odd.
The bumf for the book says ‘The Bible was the first scientific textbook of all; and it got some things right (and plenty more wrong).’ I’m really not sure about that premise – I don’t think anyone sensibly would regard the Bible as a scientific textbook. The whole reason, for instance, that Genesis gets away with having two scientifically incompatible versions of the creation story is that it isn’t intended to be a literal, scientific explanation, but rather a contextual, spiritual description. (Which is why those who take the Bible as literal truth have an uphill struggle.) This is a bit like thinking that people thought the Earth was flat in the Middle Ages, because the likes of the Mappa Mundi look like a flat Earth – again, this was a symbolic representation, never intended as a projection of the real world.
In his introduction, Jones takes a slightly dubious path, saying he isn’t attacking religious belief per se, and then setting out to do just that. I’ve nothing against scientists attacking religious beliefs, there is plenty of reason to do so – but they shouldn’t try to weasel out of what they are doing. However, in the book proper he moves away from this (until the last chapter) and gets down to some more interesting stuff.
Rather strangely, and perhaps reflecting Jones’ background in biology, he starts not with the creation, but with humans and the endless lists of descent that are found in the Bible, using this to explore the real genetic, DNA-based possibilities, including the ‘real’ Adam and Eve, separated unfortunately by about 100,000 years, so not exactly on the best of terms. These lists in the Bible are rather dull, and unfortunately the endless seeming discussions of different lines of descent in Jones’ modern-day telling also gets a little tedious.
We then jump back to the creation and some fairly straightforward big bang description – adequate, though rather skimpy compared with the depth he went to on inheritance and DNA. It’s a shame, given Jones makes a big thing of one of the distinctions between religion and science is that religion has a ‘what’s in the book is true’ stance, where science goes on data and method that he doesn’t point out that the big bang is not ‘truth’ but the best accepted current theory, but we’ve all slipped into that kind of easy science writing – it gets a bit boring to keep pointing out the limitations of our knowledge, but it would probably have been worth doing it at the start, just to emphasize this is real science, not the unquestionable word of the science oracle.
Although there is a touch of physics there, even that single chapter soon jumps to a much longer discourse on where life came from. For me there was far too much biology here, fine for a single topic book, but over-emphasised for a book based on such a broad concept. In writing terms, it’s a mixed book. Some of the content has Jones’ trademark storytelling but a lot of it is plonking facts with little flow. Some parts read well, others (often where there’s a lot of mention of DNA) get a touch boring.
In the final chapter Jones comes back to religion itself and does a fair demolishing job, though there is one glaring non-sequitur. He is commenting on wars driven by religion and concludes with a sort of rosy picture of a peaceful harmonious world without religious divides. Yet one of his principle lines seems to run counter to this. He comments ‘For civil wars, like those between nations, there was a striking fit between how long they lasted and how ethnically (and often religiously) divided the nation had become.’ He concludes that Pascal was right to ascribe evil to a religious conviction. Yet look what he has done. Take away the religion and the ethnicity is still there. Is there any reason to suppose that wouldn’t still be an issue, especially bearing in mind that ‘and often’? That’s not science, Dr Jones.
Overall, then, this is the classic curates egg of a book, not really doing what it sets out to do and rambling (I like a good diversion, but this jumps all over) too much for good storytelling, but with some undoubted good bits. It’s not a bad book, but not great either.