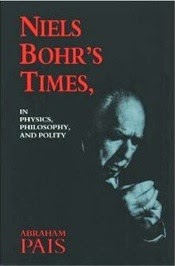 Fully, if clumsily titled Neils Bohr’s Times, in physics, philosophy, and polity, this is the definitive scientific biography of Bohr by fellow physicist Abraham Pais who knew and worked with him.
The good news is that this chunky title will give you an in-depth look at Bohr and his work. From his early days in Copenhagen, through his brief but fruitful stay in the UK, his return to Denmark, the rush to safety in the Second World War and his gradual move to elder statesman of quantum physics, it’s all here.
As is often the case with a biography written by another scientist, the science content is quite heavy and sometimes not the easiest to digest, but it is worth battling through, and the picture of Bohr himself that comes out of this book is second-to-none. Niels Bohr sometimes gets a rough time of it, in part because his own communication was often rather opaque, but Pais will really open your eyes to Bohr’s importance.
The book dates back to 1991 but is none the worse for that. If you really want to understand the development of quantum physics in its historical and scientific context, this should be on your reading list.