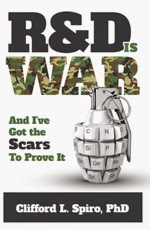 Industrial research and development is arguably the cinderella of science and technology, yet without it we wouldn’t have all the remarkable stuff we use  – from high tech gadgets to apparently trivial pieces of technology like a light bulb.
Clifford Spiro (who, if his author photo is anything to go by, is the Bruce Willis of R&D) gives us an engaging insider’s view of the realities of industrial R&D, working on a range of product areas in his career from coal technology through light bulbs to artificial diamonds. It isn’t an easy road – time and again there’s a struggle with a difficult problem, a solution is produced… and then not used. Just occasionally, though it’s a multi-million dollar winner. Spiro gives us real, coal face experience of the power of R&D, the difficulties of getting it right and the practicalities of using the scientific method in the real world, without the academic’s ivory tower protection.
When it works well, this book works really well. It features good story telling – the reader wants to find out what happens next. Spiro has a light, colloquial tone and brings the R&D environment alive. The downside is that he can be a bit summary – there is an element of ‘with a single bound he was free’ from some of the problem solving and I would like to have seen a bit more of the science explained – and I’m not sure there’s a lot of value in his end-of-chapter words of wisdom for doing R&D well. It’s when we’re getting good narrative of the R&D guys versus the challenge of, say, preventing a light bulb exploding that this becomes a great read, not as a business primer.
This is a self-published book, with the usual drawbacks, though it is very classy considering. The cover design is excellent and the text is reasonably edited. Where it is let down a little is in layout – like many self-published books the text itself is too dense, making it heavy on the eye, and for some reason all the m-dashes (a long hyphen used as a sentence break – like this) have no spaces before them, which looks odd. It’s certainly not enough to put me off recommending this book.
Were it not for the topic I would probably only give the book three stars, as it it does need some work on that summary nature – but there is so little written about R&D, and the stories are so interesting when at their best that I have had to give it four.