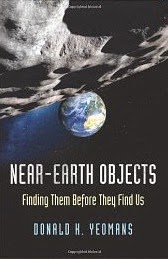 As I write this there has just been a meteor strike in Russia leaving hundreds injured, so it is very timely to be considering, as the subtitle puts it, how we can find ‘them before they find us.’
Donald Yeomans’ book introduces us to the origins of the solar system (including a relatively recent update on the traditional model with the ‘Nice model’) and explains why there is so much debris out there that has the potential of crashing to Earth from the tiny bits of dust and pebble sized rocks that burn up harmlessly as meteors to the impressively large and scary kilometre scale asteroids and comets.
While in no sense scare-mongering, Yeomans makes it clear just why we need to be on the look out for incoming material, explains what the risks are and explores the opportunities for intervening and preventing potential disaster. It’s not all doom and gloom, though, as Yeomans also gives us chapter and verse on the potential to make use of relatively accessible near Earth objects, either to get hold of scarce materials, to act as a way station en route to a distant destination like Mars, or both (when, for instance a NEO way station could be mined for water on the way to Mars).
Unlike many books involving space exploration I didn’t get the feeling of fantasy, wishful thinking or sabre rattling. Yeomans just gives us good, reasoned arguments, presented in the main in a likeable, friendly fashion. The only major irritation is that Yeomans does occasionally flip into ‘astronomer cataloguing mode’, giving us long tedious lists, foe example when describing where the near Earth objects come from. Be prepared to skip a page or two – but the focus on readability soon returns.
Overall, if you are interested in astronomy, the solar system or the survival of the human race, this is a book that should spark your interest.