The Logician and the Engineer – Paul J. Nahin *** 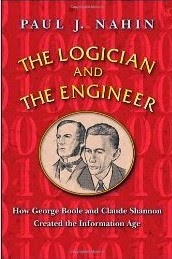 For its target readership this is an excellent book – and I have to say as someone outside that market I really enjoyed some parts – but the fact remains it is aimed at a pretty narrow segment. There’s even a little section at the front of the book that effectively says ‘read this to see if you can cope with the rest.’
The bits I found particularly appealing were a few introductory logic problems (though I’m not sure I agreed with all  the conclusions) and the pocket biographies of mathematician George Boole and information engineer Claude Shannon. However, while technically qualified to deal with the other parts of the book, in truth I couldn’t be bothered – it was too much like hard work.
For bits of it I would have to wade through far too much grunt maths, and for other bits would have had to think far too hard about electronic circuits and the logic circuits beloved of basement dwellers on computer science courses. (Or was it just my university that confined the computer scientists to the basement?)
I think the author makes the mistake that many academics make when trying to write for a broader audience: they carry through too much of the textbook, and find that the aspects that often encourage people to remember things in that context (often because they involve repetitious grunt work) actually prevent popular science readers from getting the message. It’s a shame, because the subjects are interesting, but unless you are the kind of person who designs logic circuits for fun, this is probably not the book you’d want to see.