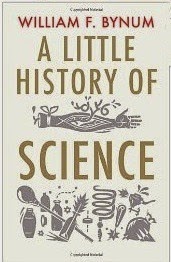 Doing all of science in one book is not an easy task, nor is it obvious how to go about it. William Bynum has chosen to provide us with a breezy high speed canter through the history of science, with the keyword being ‘history’. There is a lot of about the people involved and the context, always good from a popular science viewpoint.
Bynum manages to do this in an approachable way – almost too approachable sometimes as the style veers between writing for adults and for children. The bumf says ‘this is a volume for young and old to treasure together,’ but it really is neither fish nor fowl. The approach generally speaking is one that works best for adults, but then you get a sentence like ‘Galen was very clever and was not afraid to say so,’ that sounds ever so Janet and John.
Perhaps my biggest problem with the book is that while the history side of it was usually fine, the science was not always so. Some of it was just little factual errors – stating that the human appendix has no function – actually it has recently been discovered to have one – or referring to ‘degrees Kelvin’ like ‘degrees Celsius’ where the unit on the Kelvin scale is just kelvins (no degrees). But the problems were more painful when it came to modern physics – it did rather look like the author really didn’t know what he was writing about.
He tells us, for instance, that cyclotrons and synchrotrons were used by Chadwick in ‘smashing high-speed neutrons into heavy atoms’ – but these devices can only accelerate charged particles, and Chadwick used slow neutrons from decaying radioactive substances. He also says that the twins paradox ‘is just a thought experiment and could only happen in science fiction’. Well, no, it’s not, and on a small scale with atomic clocks it has been performed many times. He also seems confused about gravity, commenting that in space ‘there is no gravity. Astronauts and their spacecraft are essentially in free fall.’ The last bit is true, but not because there is no gravity – there’s plenty of gravity at the kind of level that, say the ISS orbits. But that free fall means it isn’t felt.
The absolute worst example is a paragraph that I find almost entirely without meaning. I would be grateful if anyone could explain this one to me:

As Einstein’s E=mc2 tells us, at ever higher speeds – almost the speed of light – in the accelerators the mass is mostly converted into energy. The physicists found that these very fast particles do some fascinating things. The electron emerges unchanged from the accelerator. It is part of a family of force-particles – the leptons.

I am baffled. Overall, then I am not sure what the audience for this book is, nor am I happy that they will get any sensible understanding of modern physics.