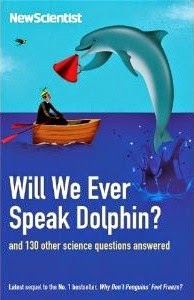 Welcome to the latest in New Scientist‘s hugely popular quirky science answers series. As with its predecessors, we have here what ought to be a disaster, as it’s a book made up of a series of columns from newspapers. With a few exceptions, these are, frankly uninspiring books that are very cheap to produce, and it shows. But because the questions are so fascinating, the books culled from the New Scientist‘s Last Word column continue to be a delight.
I think the reason they are so successful is because they tap into the reason human beings are driven to do science. Curiosity. That nagging urge to get an answer to the question ‘Why?’ that drives every conversation with a five year old. As Sheldon on The Big Bang Theory demonstrates, to maintain such a level of questioning into adulthood would be irritating indeed – but it is the residue of that childhood curiosity that thankfully makes us interested in all things scientific.
Without that drive the questions would have become dull after a book or two, but in practice they still keep coming up with crackers, from silly but burning questions like ‘Why do we have earwax?’ to seriously interesting subjects like whether we will ever be able to truly communicate with dolphins and, perhaps most important of all, whether they ever would have got the gold out of the coach in The Italian Job.
The only criticism I have is the means of getting answers. The answers also come from readers writing in. I can see this minimises effort for the editor, and is entertaining for those who write in, but it does mean that some of the answers are a bit questionable. The very first answer, about squeaky cheese gives a suggestion for why we don’t like the sound of fingernails on a blackboard that does not fit with the research I’ve seen. And there is another example where two separate questions appear to have contradictory answers, both of which are accepted by the editor without question. One says ‘Air at a given temperature can only hold a certain amount of water vapour: the colder it is, the less it can hold.’ Fifty pages later we read ‘The belief that warm air can hold more water was disproved in 1802…’ Confusing. Maybe there could be a bit more fact checking.
Despite this slight moan, this remains a solid gold series that will entertain science enthusiasts (who haven’t already read them in the back of New Scientist) everywhere.