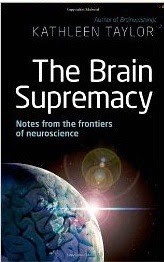 I really enjoyed Kathleen Taylor’s previous book Brainwashing, commenting that it was that rarest of species, a book that was both academic and readable, so I picked up her new title, The Brain Supremacy, with some enthusiasm. That enthusiasm proved to be partially justified.
The good news is that there is a whole lot in here we ought to know about our current best knowledge of the brain and the various fascinating bits of technology that are used to study it. If you read any human science/brain books these days you can expect to come across fMRI, but not only is Taylor one of the first to explain to me what the point of the ‘f’ is, she also takes in PET, MEG and more.
Unfortunately, though, this isn’t a book I could enthuse over as much as Brainwashing, for a couple of reasons. Firstly it’s far too long. At 368 pages it doesn’t sound enormous, but it really did seem to go on for ever. This isn’t helped by rather too much description of bits of the brain. Secondly it lacks focus. It meanders from mind reading (with some very handwaving speculation about future tech) to brain function to genetic enhancement – I found it difficult to get a feel for what the overall thrust of the book was. The writing, while fine, doesn’t give that ‘having a conversation with a real person’ feel of Brainwashing. And there was rather too much apologetic ‘this physics stuff is really complicated’ type comment.
On the minor quibbles side, Taylor perpetuates the hoary old myth that in the olden days people died in their forties. She comments ‘My grandmother, passing her 88th birthday, was unusual. Life expectancy for girls born at the beginning of the twentieth century was just 49 years, for boys 45.’ No, no, no! This was indeed the average life expectancy, because of very high infant mortality. But it doesn’t mean adults typically died in their forties. If you made it to adulthood you would most likely make your 60s and quite possibly your 70s.
Overall, then, worth reading to find out lots about brain scanners and such, but skip the first chapter (a tedious introduction) and be prepared to tread lightly elsewhere.